Over the past year-and-a-half, NRPA has published two separate studies that demonstrate the many ways people throughout the United States engage with their local public parks and recreation facilities. Per the Americans’ Broad-Based Support for Local Recreation and Park Services study, seven in 10 Americans visit their local parks at occasionally. A key motivator for visiting local parks is to be closer to nature, as indicated by nearly half of the respondents to the 2016 Americans’ Engagement with Parks study. Three-quarters of respondents to that same study support increased funding for their local park and recreation agencies.

But even with the public’s ardent support for public parks, people are increasingly losing their connection to nature. Busy lifestyles, work pressures, living in more urban settings, and the prevalence of technology all have taken us away from the beauty and rejuvenating benefits of the outdoors. Time previously spent outdoors has been exchanged for looking at the glowing screen on our mobile device or sitting behind the wheel of a car.

As a result, fewer people are gaining the physical and mental health benefits of the outdoors. Even worse, children who venture less outdoors may never gain the personal appreciation for nature that their parents and grandparents had acquired. Ultimately, this disconnection could weaken support for park and recreation funding at the very time that local, state and federal budget dollars become scarcer.

A recently released comprehensive study takes a closer look at how Americans connect with nature. The Nature of Americans report, conducted by Dr. Stephen Kellert, David J. Case and a team of researchers at DJ Case & Associates combines data from 15 focus groups, a survey of more than 770 children and their parents, and a survey of 5,500 adults to better understand their sentiment of nature, outdoor activities, perceived benefits, and the barriers and facilities to greater outdoor activity.

The result is a thorough analysis of our shifting attitudes of nature. On one level, this study follows the key findings of NRPA’s studies in that Americans value and support the nature and public open space.  At the same time, this study also demonstrates that adult and children do not spend as much of the day interacting with nature as we would like.

The 364-page report contains a wealth of findings, including:

One research finding that is critical for local park and recreation professionals involves how children and adults each define “nature.” Children see what they see out the window of their home as being nature. This means children see nature as what is in their backyard, the local creek, an outdoor sports league or many other things that are outdoors.

But for adults, the definition of nature is more complicated. The report’s authors note that adults have “set a high and even impossible standard for what they perceive to be ‘authentic’ and ‘pure’ nature.” They are less likely to see a place near where they live as being “nature,” and they often identify solitude as a necessary condition to being connected to nature. When presented with a list of places and activities, 82 percent of adults agreed that national parks were “nature,” while 77 percent said they considered state parks to be “nature.” But a significantly lower percentage of adults — 52 percent — say local parks represent nature to them. 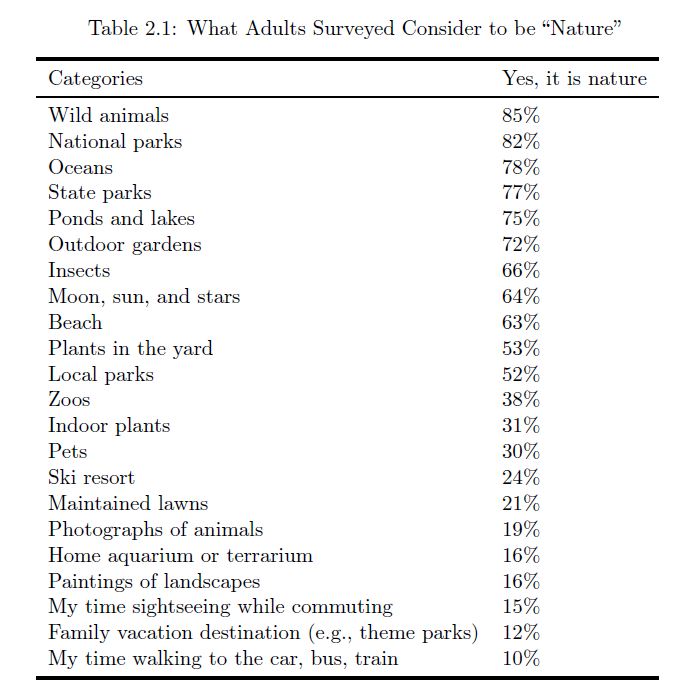 The authors describe adults’ view of nature as being “less cultivated, more distant, less commercially oriented, and less common in daily life.” As a result, adults, in their minds, are not interacting with nature frequently, at least based on the high standard for what they perceive constitutes as nature. And if they are not interacting with nature on a regular basis, they may be less likely to instill the value of nature to their children.

The implication that adults are less likely to view something that is nearby and convenient, including local parks, trails, and other outdoor facilities, as nature is problematic. While our national and state parks are beautiful and valuable, it is local parks where people — young, middle-aged, or older — are most likely to visit on a daily, weekly or monthly basis. They represent the greatest opportunity to bring people back to nature. Reconnecting people back to nature may involve reintroducing your community to what you have to offer.

What are your thoughts on adults being less likely to see local parks as being a part of nature in comparison to national and state parks?  What are there opportunities in terms of new facilities and improved marketing that would narrow this gap?  Answers to these questions will inform you and peers on how local parks and recreation can help people reconnect with nature.