This is blog three of five in our series covering the Americans’ Engagement with Parks survey and recent NRPA research.

Parks and recreation are leading the charge to make our communities healthier. Whether by providing increased opportunities for physical activity through its vast network of parks, fields, trails, pools and recreation centers, offering healthy food options, or educating the public on healthy lifestyle options, local park and recreation agencies positively impact millions of people every day. Your agency’s role as a solution to the health crisis facing our communities is why health and wellness is one of NRPA’s Three Pillars.

Recently released NRPA data finds that the American public wholeheartedly agrees that health and wellness should be a priority of their park and recreation agencies and strongly support actions consistent with this message.

Three in four respondents to NRPA’s Americans’ Engagement with Parks survey agree that it is either “extremely” or “very” important” for their local park and recreation agency to focus their energies on positive health and wellness outcomes. This includes offering facilities and services that improve both physical (71 percent) and mental (76 percent) health. This belief is held by Americans of all stripes — spanning the generations, differing types of household information, income groups and political affiliations.

But beyond its vast array of facilities, services and offerings, park and recreation agencies can also promote healthier lifestyles through their own policies and actions. With these policies and standards, the agency leads by example in their quest to improve the health of the people that they serve.

NRPA Research data clearly finds that the general public wants to see local park and recreation agencies put into place policies that raise the standard on healthy living in our communities. Two recent NRPA Park Pulse polls highlight the strong support that Americans have for these policies.

Many park and recreation agencies ban smoking and the use of tobacco products in most or all of their facilities. NRPA earlier this fall published a policy statement on Tobacco Consumption in Parks that “expressly supports a prohibition on the consumption and use of tobacco products at all park and recreation facilities in order to protect the health of our workforce, visitors and the environment.” But not all agencies have made this move and a number of agencies have exceptions with their tobacco ban policies for some of their facilities. 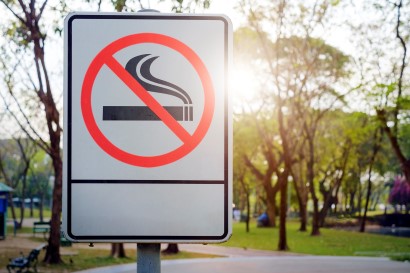 Americans’ support for tobacco bans at public parks is overwhelming. Four in five Americans support a ban on tobacco products at their public parks and recreation centers according to an NRPA Park Pulse poll we published in October. As we saw with their support of the NRPA Three Pillars, the level of support for a total tobacco product ban at public parks and recreation facilities does not waver by respondents’ age, region, race or ethnicity, although it is stronger with some groups. Respondents from higher income households are more likely to support tobacco bans. 86 percent of people from households with incomes greater than $100,000 support the ban versus a still-robust 73 percent of those from households with incomes under $35,000. Similarly, 86 percent of survey respondents who have a college degree support tobacco product ban in comparison to 76 percent of people with a high school diploma or less.

Another area where park and recreation agencies can “walk the walk” in promoting a healthy lifestyle is at the concession stands and vending machines located at their facilities. These are important revenue resources for park and recreation agencies. Yet at the same time, these concession stands and vending machines frequently sell food and drink choices that run contrary to a healthy lifestyle, often laden with sugar, salt and saturated fats.

Americans desire a healthier lifestyle and are paying closer attention to the foods and drinks that they are putting in their body. November’s Park Pulse poll finds that two-thirds of Americans want greater access to healthier food and drink options at vending machines and concession stands located in public spaces. Virtually all segments of the U.S. population want improved access to healthier food choices when they visit their local parks and recreation facilities, but the desire is even stronger among parents, Millennials, African-Americans, Hispanic Americans and those with lower household incomes.