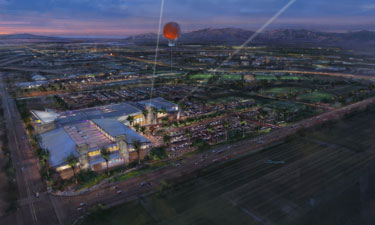 The Orange County Great Park, with a history of generating more controversy than recreation, continues to take shape at the former Marine Corps Air Station El Toro in Irvine, California. Since its inception in 2002, the project has served as somewhat of a political football, as accusations of mismanagement of personnel and funds hampered development. The Great Recession of 2008 further complicated matters, and only in the past few years have city leaders and developers reached what all hope is a viable plan to finish the largest new metropolitan park in the state.

That almost 700 acres of Great Park is finally under construction and on target for public use is a welcome contrast to the park’s tumultuous past.

The genesis of Great Park came in 2002, when Orange County voters approved a ballot measure halting plans for conversion of the former Marine base into an international airport, replacing it with a broadly defined regional park. The base was annexed by the city of Irvine a year later.

In the meantime, federal officials decided to auction off the closed property. Homebuilding giant Lennar acquired the 4,682-acre property for $649.5 million in July 2005. Lennar agreed to deed 1,347 acres to the city for Great Park, as well as a payment of $200 million toward park planning and development.

The first years of Great Park’s existence were full of high expectations. A nine-member board of directors (five city council members and four independent individuals) commissioned the park design that won national planning awards, engineers drafted infrastructure schematics and derelict buildings on the property were demolished.

Dozens of organizations and individuals approached park leaders and staff proposing partnerships that might result in museums, community centers or specialty sports facilities. A major entertainment conglomerate organized a rock concert on site, and Cirque de Soleil staged its unique performances at the park.

Initial development of Great Park was modest — a play area and four soccer fields were built. A historical timeline was painted on a preserved portion of a runway, a small hangar was repurposed for events and a permanent base for balloon operations was constructed (Lennar donated a helium balloon to the park, which soon became its signature symbol). Balloon rides were free and thousands of local residents made the 400-foot ascent.

After taking control of Great Park by rewriting its legal charter (relegating the nine-member board to an advisory capacity), the Irvine City Council decided to “activate” the park with concerts, art shows, pumpkin festivals and similar public events.

But, the growing contrast between lofty assurances of big things to come and the dearth of significant construction began to generate criticism in the press and from other elected leaders. The park’s many sole-source contracts also raised eyebrows. Eventually, the Orange County Grand Jury launched an investigation into the Great Park project.

Great Park became entwined with city politics, at once embraced by the majority faction that had controlled the city council for more than a decade and targeted by opposition candidates who focused on the continued spending and unfulfilled promises.

In 2008, Great Park was caught up in the national financial chaos — Lennar’s key lender was Lehman Brothers, which went bankrupt during the Great Recession. Lennar cut staff and slowed operations, later positioning development of Great Park under the auspices of Five Point Communities.

The potential for funding to build out Great Park — estimated at more than $1 billion — initially looked positive because the city had placed the entire project in its redevelopment zone. Over a 40-year lifetime, redevelopment would generate hundreds of millions of dollars if all the residential and commercial development was built. But, that bubble burst in early 2011 when redevelopment agencies were disbanded by California Governor Jerry Brown. As the prospect of significant funding evaporated, the long-term viability of Great Park became a hot topic of debate in the city and county (eventually, Irvine settled a lawsuit it filed against the state that challenged the demise of redevelopment, accepting $227 million paid out over a decade).

City elections in 2012 brought in a new majority of councilmembers who demanded answers about Great Park spending. They commissioned two forensic audits, supplementing an accounting firm with a law firm. The city posted on its webpage the depositions of 23 former staff, consultants and others connected to the project, that were conducted for the audit. Testimony in the depositions pulled back the curtains of Great Park activities, detailing accusations of political favoritism, power struggles between consultants and staff and an atmosphere of apprehension and uncertainty.

The 2014 elections seated a new council that extended the scope of the audit, raising the possibility that legal action against some Great Park consultants might follow.

In March 2015, the city released the results of an audit of past Great Park spending and management that took more than two years to complete. The audit testimony painted a picture of dysfunction, political intrigue and alleged cronyism, including multiple accusations that a political consultant with no engineering or planning expertise became the unofficial, self-appointed project manager of Great Park. Especially remarkable was a 27-page statement from former Great Park CEO Mike Ellzey that claimed his authority was undercut by consultants and elected officials. Ellzey, whose six-year tenure as Great Park CEO was a record (the first CEO lasted a little more than two years, the second just four months, the third about 14 months), left the city in early 2015 for a new job as director of the nearby Nixon Library.

With so much testimony already public, the release of the audit was anticlimactic. More than 150 pages long, it concluded that “hubris” and an inability of Great Park leaders to deal with financial and management issues in a straightforward manner allowed the project to drift far from its original path.

Some of the consultants who were criticized in the audit have fought back with lengthy rebuttals and a website detailing their version of events. They also convinced a committee in the State Assembly in late summer to order the California State Auditor to audit the Great Park audit. Results of the state investigation are not expected until well into 2016.

Irvine Assistant City Manager Eric Tolles now leads the Great Park project. According to city estimates, there is about $327 million available (not counting the money Five Point Communities is now spending on development of the park) for construction, operation and management during the next 10 years.

Today’s visitors to the Great Park site will find much activity underway — two massive runways are being demolished; the 4 million square feet removed thus far yielding 145,000 tons of concrete and asphalt that will be recycled into roadbeds and parking lots, clearing 688 acres of land that will become, by mid-2017, a modified and slimmed-down version of the original Great Park design.

Great Park’s other major recreational element is a 185-acre golf course and clubhouse. Like a cat with nine lives, the golf course has been in, out and now back in park plans during the decade Irvine city leaders have overseen its planning. The course replaces much of what was a key element in the original Great Park design, created in 2007 by Ken Smith, a New York landscape architect. Smith proposed a man-made canyon gouged from one end of the property to the other as a counterpoint to the otherwise flat landscape. Smith’s plan also called for a large lake and bridge, forested bosque, botanical garden and a section of the park reserved for museums and other cultural uses.

The 41-acre bosque remains in the new plan and has begun to take shape. It will connect to a 36-acre trail bisecting the two tracts of homes directly adjacent to Great Park property (the first 700 homes developed by Five Point Communities are separated from Great Park’s eastern border by a large roadway). An adventure playground for children will be located in the bosque as well.

A reflection of Orange County’s agricultural heritage, 77 acres of Great Park will be farmed and a community garden center relocated to accommodate popular gardening classes and a farmer’s market. Finally, although not contiguous to the main Great Park parcel, a 178-acre wildlife corridor will hug the southern boundary of the former base perimeter, linking to other regional corridors. It is scheduled for completion in 2018-2019.

Five Point Communities received permission from city of Irvine leaders in November 2013, to spend $215 million of its own funds and assume management of Great Park construction in return for an increase in development of its property around the park — 4,600 homes in addition to a similar number previously approved.

While Five Point concentrates on the 688 acres that will encompass most of Great Park, local leaders have turned their attention to the park’s 260-acre Cultural Terrace section, which the city is responsible for planning and developing. Smith’s original plan for the area showed a large lake surrounded by a series of sites where cultural institutions might locate museums, a library, botanical garden or similar uses. Two massive buildings formerly used as aircraft hangars on the parcel have been identified for reuse, possibly as a military museum. Past studies also identified the Cultural Terrace as a site for an open-air amphitheater.

Five Point agreed to fund $2 million in studies to bring Cultural Terrace development options into sharper focus. In late October 2015, the city and Five Point agreed on a scope of work for the $2 million, which will identify four major study areas: infrastructure and engineering, planning and circulation, architecture and programming, and a financial analysis.

And, in November 2015, the city and the Anaheim Ducks professional hockey team signed a deal that will lead to the creation of a 270,000-square-foot ice skating center on 13.5 acres of Great Park property. The city agreed to spend $1.7 million on infrastructure to serve the site — the Ducks will build and operate four ice rinks, one with a 2,500-seat arena. After the facility is open the city will receive $250,000 or 25 percent of the facility’s annual profit per year (whichever figure is lower). The Ducks will lease the land for 25 years and the option for 25 more, at which point the facility reverts to city ownership.

Time will tell, but at the dawning of the new year, all signs point to the likely completion of this behemoth park and recreation facility, despite its many fits and starts.

Michael Stockstill is a retired public affairs executive from Orange County. A former journalist, he has written extensively about Great Park.