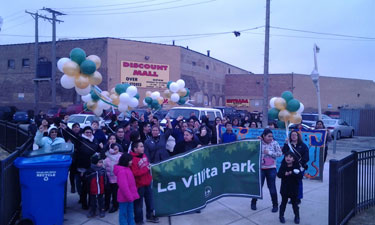 On a trip to 26th Street in Chicago’s Little Village neighborhood, visitors are struck by the rich Mexican culture and the thriving business activity. Regarded as the capital of the Mexican Midwest, Little Village is also the second-highest provider of tax revenue to the city of Chicago, behind only the Magnificent Mile in downtown. A recent article in Crain’s Chicago Business marveled at the economic prowess of the community:

“The strip lacks the glamour of Michigan Avenue or the wealth of Lincoln Park. Instead, the area between Kedzie and Kostner Avenues is dotted with family-owned restaurants, bakeries, barbershops, grocers and clothing shops, plus an occasional Western Union and Verizon outlet. Nothing about the simple signage or interiors hints at the huge volume of cash being spent: some $900 million annually, according to the most recent figures available.”

If the thriving business environment in this immigrant community is a surprise, then the neighborhood’s standing as a center of environmentalism in Chicago is even more startling. Low-income Latinos from Little Village have waged successful campaigns that closed a coal power plant in the area and transformed a superfund site into a 22-acre public park. Working alongside the Little Village Environmental Justice Organization (LVEJO), a local nonprofit, these community-led victories for clean air and open space are two of the most important grassroots environmental justice success stories to occur across the country in recent years.

As a densely populated environmental justice community located on the southwest side of Chicago, Little Village is an excellent case study of a community that has endured environmental racism. According to a 2008 Huffington Post article, Little Village’s ZIP code was regarded as having the “second-worst air quality in the eight-county region of Chicago, [and] children in this area had the ninth-highest rate of lead poisoning of Chicago’s 77 community areas with asthma rates of 17 percent.” For decades, a coal power plant in the area also spewed more than 3 million tons of toxic carbon dioxide emissions each year, and for many years, low-income community members lived next door to an extremely toxic property. Since the late 1980s, residents living next to the abandoned Celotex superfund site complained that the site was responsible for troubling health impacts on young children. Through years of door-to-door organizing, community meetings and protests, neighbors learned that children were being impacted and displaying high rates of asthma and other health concerns. In a recent oral history, one Little Village resident, Teresa, recalled that her daughter gave birth to a baby boy who tested positive for lead. The doctors speculated that Teresa’s daughter had been breathing in particles from the contaminated site. Other neighbors worried about rashes on their hands and bodies that wouldn’t go away. An EPA investigation of the site and surrounding areas confirmed the contamination, and one of their reports mentioned that high levels of polycyclic aromatic hydrocarbons, or PAHs, were observed, which could potentially lead to negative health outcomes, including cancer. Currently, Little Village continues to be a frontline community where local residents are impacted by industrial legacies and multiple sources of pollution with residential areas placed immediately next to an industrial corridor and polluting factories. Each day, heavy diesel trucks clog traffic, nearby shipping waterways release methane and raw sewage and hundreds of contaminated brownfield sites lay abandoned.

The campaigns to shutter the coal power plant and reclaim blighted land for park space spanned more than 15 years before Little Village residents were successful, involving Latino high school students, immigrants, professionals, LVEJO staff and other community organizations. Throughout the process, residents noticed the difference in treatment the community received regarding the cleanup process in comparison to other Chicago neighborhoods. For instance, in her 2014 piece for Midwest Energy News, author Kari Lydersen mentioned that in another Chicago neighborhood, a chocolate factory was charged with violating “opacity limits for a total of about 26 minutes over two days,” while the coal power plant in Little Village (and another in Pilsen) had violated the opacity limits for approximately “45 and 32 hours at the [coal power plants] between 2002 and 2006.” After a decade of neighborhood organizing, lawsuits and asking the EPA, local aldermen and the city of Chicago to move forward with the cleanup and park development process, LVEJO and community leaders successfully forced the retirement of the Midwest Generation Crawford Coal Power Plant in 2012 and opened La Villita Park in 2014. These successes were credited to the tireless efforts of local activists to educate the wider community about the harmful impact of the coal power plant.

Further, the notion of establishing a park was driven by community and youth leaders who understood that the eastern part of the neighborhood had always struggled with lack of access to parks and recreation resources. Access to this type of public space was determined by longstanding conflicts between two major gangs in the community: the Latin Kings and the Two Six. The Latin Kings control the east side, which is the most populated, while the Two-Six control the west. This presented a significant challenge when east-side residents attempted to use Piotrowski Park, the only large park and field house in the west side neighborhood, up until 2014. Many east-side residents reported being harassed when attempting to use Piotrowski Park. Consequently, the new La Villita Park addressed the severe need for open space on the east side.

La Villita Park represents the desires of community members, and that’s a big reason why it’s regarded as so special. LVEJO staff members conducted charrette activities at schools, community events and churches with youth, families and other Little Village residents. These were done to determine their needs and preferences for park amenities. The charrette activities revealed that the community wanted similar services as other parks in Chicago. For example, the neighborhood members wanted a playground, soccer fields, basketball courts, a skate park, picnic pavilion, fitness stations and restrooms. Residents also determined the name of the park through a survey sent to more than 700 households. In recent interviews, LVEJO staff members stressed the importance of involving community residents in the planning of neighborhood services, something that is often a challenge in many communities across the nation. The new park serves as a groundbreaking example in Chicago of a just transition from an extremely contaminated site to a healthy community asset that will serve the neighborhood for generations. Because of the extraordinary organizing efforts of everyday community members and the commitment of LVEJO, more than 5,000 children in the surrounding area will now have a clean park for recreation.

In an effort to address crime-related challenges in the community, the mayor’s office, in partnership with the Chicago Park District, LVEJO and other Little Village community residents and organizations, were able to proactively launch the “Keep La Villita Park Safe and Beautiful Pilot Program” during summer 2015. The pilot program was set up in order to maintain positive relations between various institutions (e.g., Chicago Police Department, Chicago Park District, Chicago School District) and Little Village residents. It also aimed to increase park programming during times when crime is most likely to occur. The program was also meant to establish a working relationship with the Chicago Police Department with the end goal of reducing the number of arrests and community/police conflict at the park. The pilot program had several successes during its first year of implementation, including having no homicides, shootings or major acts of violence in the park. The Mi Parque volunteer program was also created, which was responsible for helping to oversee the park and creating a collaboartive relationship with park users.

Like the rich Mexican culture and bustling economic activity on 26th Street, the fight for environmental justice continues to thrive in Little Village. Committed to holistically addressing the improvement of health and environmental conditions in the area, community leaders and LVEJO are currently working on a local climate adaptation plan for Little Village from a social justice perspective. Specifically, LVEJO and the La Villita Park Advisory Council are examining how community leaders and organizations can proactively plan for the unintended impacts of park development and other revitalization initiatives, which include gentrification. The organization is also advocating for a new field house in La Villita Park to ensure usage during the winter months. Consequently, the case of Little Village supports claims that people of color do in fact care about the environment and should be regarded in community planning efforts.

Mariela Fernandez, Ph.D., is an Assistant Professor in the Parks, Recreation and Tourism Management and College of Health, Education and Human Development Departments at Clemson University. Antonio Lopez is the Executive Director for the Little Village Environmental Justice Organization.