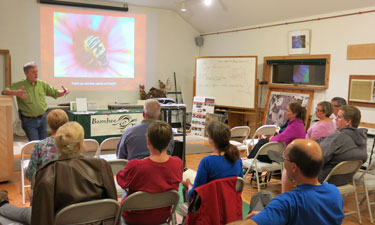 The question, “How can we do more with less,” is often asked within park and recreation agencies. Operating under this auspice is the new normal. Happily, there exists an often-underutilized source of talent and support in every community — friends groups. Such citizen bodies prove particularly relevant when it comes to conservation in parks, where they are poised to help an agency do more, with more.

The list of needs that friends groups can help to address is practically endless. Many groups are equipped to support invasive plant removal, plant and maintain pollinator gardens, install bird and bat houses, maintain trails, build political and financial support for park enhancements, promote parks at public events and apply for grants.

Perhaps even more important are the less-tangible ways friends groups help a park and rec system succeed. Friends groups are able to bring forth a voice of the community that is not bound by the municipal process — pushing forward issues that may not be possible from within the agency.

Friends groups form because people care. There exists a passion that can be stoked by a park and recreation agency toward benefit or burden. All friends groups, at some time or another, are at odds with the park and recreation agency. Concern with the condition of a park or an agency’s plans for a park are primary reasons friends groups are formed. However, the underlying motivations of individuals who assemble to support a park are almost always admirable.

Friends groups can, if empowered, provide a meaningful solution when an agency is tasked to do more with less. Engaging friends groups, like those detailed below, to support park needs should be the new, new normal.

Friends of Camarillo Dog Parks organizes support for three dog parks within Camarillo, California. Formed in 2010 with the goal to educate, promote and support dog-related challenges and ideas, the group is a significant voice and collaborator in improving parks within the city. “The Friends of Camarillo Dog Parks has been one of our main supporters for park improvements,” says Michele Kostenuik, administrative analyst for Pleasant Valley Recreation and Park District. Agency staff members attend the group’s board meetings and work closely to provide project guidance. To help raise support, the friends group formed a number of partnerships and sponsorships with community organizations and businesses. Additionally, Friends of Camarillo Dog Parks sells branded shirts, hats and other wares during events to help raise funds and awareness. During the past five years, the group has raised more than $60,000 to support the parks and has assisted with installation of benches, fencing, water fountains and signage. Furthermore, volunteers with the group recognize the contribution they can make to conservation needs by participating in National Trails Day events, tree plantings and pathway improvements.

Friends of Vernon Park, in Philadelphia, Pennsylvania, is one of more than 80 groups supporting parks in the city. These groups are the “eyes and ears who have the pulse on the community,” says Patty-Pat Kozlowski, director of stewardship and volunteers with Philadelphia Parks and Recreation. Managed by a core of volunteer officers, but made possible through the collective support of many, the group hosts park clean-up days, including their annual Love Your Park Day, and special events like the Fall Bazaar, oldies nights and The People’s Poetry and Jazz Festival. Highlighting the value of input from the Friends of Vernon Park, even beyond the park borders, the city invited the group to participate in stakeholder meetings for a nearby bus shelter redesign. Reflecting on the importance of partnerships with Philadelphia Parks and Recreation and Fairmount Park Conservancy, Friends of Vernon Park President Ruth Seeley writes in her annual update letter, “All these people are responsible for many parks in Philadelphia, but manage to make us feel special and supported in every way.”

Friends of Banshee Reeks, in Loudoun County, Virginia, helped shape the vision for Banshee Reeks Nature Preserve upon its opening in 2001. The friends group has a history of supporting citizen science projects, such as invasive plant removal and bird banding, as well as purchasing items needed for park upkeep. The group hosts a website and Facebook page and sets up a booth at community events with the aim of raising public awareness about the nature preserve. The Friends of Banshee Reeks board meets monthly with preserve manager, Ron Circe, to discuss upcoming activities and assess how it can support the preserve. When asked how the friends group has changed since its inception, Circe says, “The Friends of Banshee Reeks was formed by a group of passionate people who saw the opportunity to protect this unique property, not only for people, but more importantly for nature. Over time, the value of Banshee Reeks has been cemented and the group has been able to expand its focus to promotion of the preserve, while also helping fund special projects as they come up. I know the group is committed to what is best for the preserve, which helps make my job easier. It’s a great partnership.”

How an agency engages with a friends group depends on the group’s mission, its appetite for involvement and the agency’s needs. While friends groups should always be viewed as potential partners, it is the park and recreation agency — with background knowledge, professional expertise and a budget and mandate — that should set the stage for a relationship that mutually benefits both parties. The foundation for the relationship must be built on trust and transparency.

Whether a community has dozens of friends groups or is on the cusp of forming its first, suggestions for embracing the pool of talent and resources within a friends group include:

1. Hold regular meetings. Meetings are great opportunities to discuss the status of projects, upcoming activities and specific issues. Some friends groups include the park manager as a non-voting member of their board — a great way to signify the partnership.

2. Create friends groups where none exist. Many friends groups are formed by the nudging of a park and recreation agency. Given basic resources such as meeting space and staff time, community members are more likely to feel empowered to organize support for their neighborhood park.

3. Make a list of needs (or wants) and share this with the friends group. Organize the list by those needs requiring only time and those with an additional financial cost. Don’t be afraid to discuss what you can realistically accomplish and what is likely going to need additional volunteers, money or political support from the friends group.