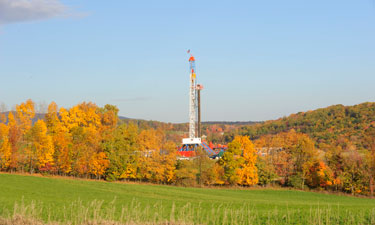 Hydraulic fracturing, or fracking, is becoming an increasingly prevalent issue for park and recreation professionals. Energy companies are becoming increasingly active stakeholders in parks and recreation because of the valuable pockets of natural gas that underlie many public spaces. Recently, there has been growing interest in placing exploration and extraction wells in or adjacent to a number of public park and forest systems across Europe and North America. Opponents of fracking leases on public land have argued that in addition to air contaminants and polluted grey water on recreational fields, park acreage will be lost to fracking operations and park attendance will decrease. For administrators and policymakers, these outcomes would be especially troubling given the role that public green spaces are expected to play in contributing to health and well-being. In 2015, we conducted a study to understand perceptions of fracking by park visitors.

We conducted a preliminary exploration of the potential effects of fracking on or near publicly accessible parkland, focusing in particular on the possible implications for park users and administrators. To achieve this aim, a purposive sampling technique was used to distribute surveys to self-identified park users living in five states (Kentucky, Pennsylvania, Ohio, Tennessee and West Virginia) in the Appalachian Basin of the eastern United States (n = 255). This region was selected because it is home to a number of state and national parks — public land used for sport and recreation — currently considering or having already consented to fracking. The study covered three general themes: (1) general attitudes toward fracking, (2) attitudes toward fracking on public land and (3) perceived impact of fracking on park usage.

Each respondent reported visiting a local, state or national park at least once per year, with more than 40 percent visiting at least once per month. Respondents reported the following characteristics: self-identified gender was 58 percent female and 42 percent male; average age was between 34 to 44 years old; average family income was $50,000 - $79,000; level of education — 81 percent possessed a higher level of education above high school; and political affiliation — 42 percent Democrat, 33 percent Republican and 24 percent Independent or no affiliation.

1     In general, most respondents expressed familiarity with the process of hydraulic fracturing. More than 60 percent reported being either somewhat familiar or very familiar with the term “hydraulic fracturing;” on the other hand, 10 percent had never heard of the term before taking the survey. Almost one-third of the sample lived in a region impacted (either currently or expected to be) by fracking. Most respondents (40 percent) opposed fracking in any form; while 23 percent were supportive, 25 percent were on the fence, and 12 percent were unsure.

2     Park users expressed concern that fracking, occurring on or near their public parks, would negatively impact their participation. Only one-third of participants indicated their willingness to participate in recreational activities near fracking operations (33 percent, compared to 38 percent unwilling and 29 percent neutral). More than half of all respondents also expressed the following:

4     While park users generally held strong opinions that fracking had a negative impact on the natural environment, most park users surveyed for this study were less critical when it came to its economic benefits. Park users’ attitudes toward the economic impact of fracking on public land were far more neutral (e.g., regarding its contribution to traffic and gas prices), and in some cases, were positive (such as its impact on the creation of temporary jobs).

Based on the results of this study, it is clear that some park users in Appalachia are concerned about the future of their public green spaces. Park users who participated in this survey expressed concern that their ability to access and enjoy their favorite local, state or provincial, or federal parks systems could become hindered if nearby land was to be leased for natural gas exploration and extraction. While it is somewhat unclear why park users might have this suspicion, their survey responses yield some insight. Although some park users may believe their access to a park could become limited due to increased traffic or park closures, there is some evidence to suggest park users would avoid parks near fracking operations out of personal preference: 38 percent disagreed with the statement, “I am willing to participate in recreational activities near a fracking operation,” and 56 percent indicated they were “willing to travel further to visit a park that was not affected by fracking operations.”

The results offer insight related to the implications of fracking and provide evidence to use caution on the acceptance of fracking near public lands. For example, for park directors living in areas where fracking might soon take place, this study suggests your park visitors might be less likely to attend your facilities. Therefore, it is important for concerned parties to speak up and share anxieties with legislators. Our results are fairly clear: People seek to avoid areas near fracking operations. Thus, park directors should be at the forefront of the current debates around privatization of public lands and fracking leases.