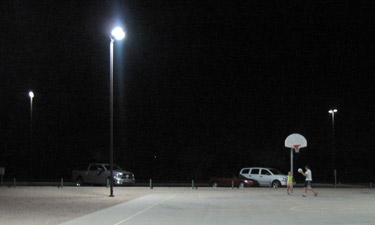 Chattanooga’s Coolidge Park, built in 1999, was a great success by day, becoming the city’s most visited park. But at night, the park was almost a victim of its own success.

“This is one of our premier parks in Chattanooga,” says Larry Zehnder, administrator of parks and recreation. “We were having gang issues, with teenagers in gang groups assembling in the park.”

One of the major obstacles to better police enforcement in the Tennessee park was the limited lighting, which made it difficult for police to identify people at night. So, with the assistance of a grant from the U.S. Department of Energy to the city’s Office of Sustainability, Chattanooga invested $252,000 in a new high-tech lighting system for Coolidge Park. Beyond the immediate concerns about improving safety, Coolidge Park was an ideal test site for new energy-efficient lighting because the city had previous energy usage data for the park.

The city turned to a local Chattanooga-based company, Global Green Lighting, to install a mix of magnetic induction and light-emitting diode (LED) streetlights. Company owner Don Lepard explains that magnetic induction lighting is a very mature technology, dating back to Nikola Tesla in the 1890s. Because no wires enter the bulb, with the electricity instead conducted into the bulb through magnets, the lights are known for their long lifespan of up to 80,000 hours.

In contrast, LED lighting has developed rapidly over the past several years, in part due to federal government aid for solid state lighting application development. LED lights are somewhat brighter and last even longer (80,000–100,000 hours) than magnetic induction lights but are more expensive. Because both lamps provide significant energy consumption savings over metal halide and high-pressure sodium lights, Lepard says that choosing between the two types of lights is a simple matter of cost versus benefits.

“How much light do you need?” Lepard asks. “And when do you want to make back your return on investment?”

But the most unique aspect of the Coolidge Park’s new lighting is the control system. Smart grid technology combined with radio control means that each light has its own meter and independently reports its power consumption. Park managers know within a few seconds when a light is not working and can remotely override timed programs as needed. And by using their squad car laptops, Chattanooga police also can raise, lower, or even flash the park lights.

“Here was an opportunity to not only take care of the energy and cost savings but also to help in crime prevention and enforcement issues,” Zehnder says. “Every police car in Chattanooga has laptop computers that have the capability of going on this website and changing the light levels in these parks. So they can be driving by, see something happening, and immediately turn up the lights from their car.”

Thanks to a 73-percent reduction in electricity consumption and an almost complete elimination of crime in Coolidge Park, the Chattanooga City Council has since expanded the lighting replacement program to most of the city. Magnetic induction lights will be used on side streets and residential areas while brighter LEDs will light major streets, bridges, and commercial areas. This $18.2 million retrofit of 27,000 streetlights will also brighten Chattanooga’s economy, as Global Green Lighting has decided to assemble the lights in the United States rather than China. Between the Chattanooga contract and orders from other cities, the company plans to add four assembly lines, eventually employing up to 250 people.

“Since these lights have been installed, there has been zero violence at that park. Now you go out there at night and there are Frisbee leagues, there are people out reading and studying in the park under the lights,” Lepard says. “There’s a street next to the park that you had to cross through the darkness to get to, and the businesses there were really suffering because no one was coming after dark. Now they’re staying open later because the lighting has improved and their business has increased by 25 to 30 percent.”

Playing HORSE with a Light of a Different Color

The Town of Sahuarita, Arizona, near Tucson, also recently installed magnetic induction lights in parks, parking lots, a water reclamation facility, and the town hall municipal center parking area. One of the major benefits has been the improved quality of the light, even though the lamps use far less energy. The town partnered with Phoenix-based company Brown Wholesale, a division of WESCO Distribution; Curtis Moldenhauer of EDG Reps, Fulham; WDI International, Ltd.; and local electrician “Lennie’s Electric” to install its mix of magnetic induction lights.

“We just completed the basketball and volleyball courts in one of our parks,” says Parks and Facilities Manager Brian De Breceny. “The original lighting was 400-watt high-pressure sodium, and we replaced those with 200-watt magnetic induction. That’s a 50 percent reduction in consumable watts, though we are actually seeing a savings of more than 59 percent due to the energy-efficient equipment, and the light is more like daylight.”

In this joint effort between the Sahuarita parks department and public works, De Breceny credits Engineering Technician Thomas Garcia in the public works department for researching and recommending magnetic induction lights and securing grant funding from the Arizona Governor’s Office of Energy Policy for the project. Some lights were retrofitted by reusing the fixture heads and replacing the inside with a retrofit kit, while retrofitting other lights, such as those at the sports courts, involved completely changing out the fixture head. De Breceny estimates the cost for the latter retrofit at $400 to $500 each but notes that each will pay for itself rather quickly in energy savings and will last years longer than the usual two- to three-year lifespan of sodium lights under typical usage in Sahuarita’s parks. The magnetic induction lights utilize only a trace amount of contained mercury, which can be easily and properly disposed of when replaced, and use a single electronic generator instead of a ballast, igniter, and capacitor.

De Breceny and Garcia have seen between a 40- to 80-percent reduction in energy consumption in most cases. Before and after photos make the difference in color obvious. De Breceny says that park users have been very pleased with the lighting improvement, enjoying the whiter, clearer light versus the yellow hue of the sodium lights.

Another energy-saving lighting initiative in Sahuarita parks was the installation of Musco’s Light Structure Green (LSG) system at its sports fields. Advanced photometric technology reduces the need for lighting heads by half, while focusing the light on the field and reducing migrating light pollution.

“We live in an area where we have a dark-sky ordinance because we’re in very close proximity to the Smithsonian Institution’s Whipple Observatory,” De Breceny says. “They’re very pleased with it too, because it doesn’t pollute the night sky with nuisance light. It keeps the majority of light on the ground…it concentrates right on the field itself.”

As with Chattanooga’s street lights, an important component of the LSG system is the remote operating system. Controlled by desktop computers, the system can be programmed for a specific start/stop time or to start at sundown. Authorized park and recreation staff can call on a cell phone for a time extension or alternatively for a cancellation in the case of bad weather or an early off.

De Breceny has been impressed not only with the 50- to 60-percent reduction in energy costs, but also with ease of maintenance for the LSG system.

“It has a 25-year warranty and Musco has stood by their product unbelievably well. We have not had any problems that they did not cover,” De Breceny says. “They also will re-lamp the fixtures for free at 5,000 hours. They constantly monitor the system for problems…They help my staff walk through the system if there is a problem and overnight the parts.”