“The Friendly City” is a motto that the city of Harrisonburg, Virginia, takes to heart. The city strives to be as welcoming as possible — to both human visitors, as well as a plethora of other species the city wants to attract as part of their new pollinator program. The key is to create a pollinator habitat with plenty of plants. To accomplish this, Mike Hott, the city’s landscape supervisor created a custom palette of native flowers that will be “in bloom from spring through fall” — making Harrisonburg a pollinator-friendly city by nature.

The city’s new pollinator program was established in the fall of 2017 by Hott.  As a beekeeper and certified arborist, he brought a lot of pollinator knowledge with him as he began his journey with the Harrisonburg Parks and Recreation Maintenance Division. He immediately recognized the traditional annual pallet of landscapes around the parks. Within the first season, he started to convert traditional landscapes to pollinator habitats, which is more sustainable as the plants come back every year once they are established and require less care and maintenance — but not less visual beauty. Hott was able to utilize his prior experience purchasing pollinator plugs from nurseries in bulk to jumpstart the program while keeping costs low for the city. The plugs arrived in late February and were nurtured for 12 weeks inside our greenhouse before staff began planting them around the city. The parks department already had one small greenhouse, but soon expanded by adding a second, larger one.

The reaction to the pollinator plants after that first season was very positive. The pollinator habitat around the Cecil F. Gilkerson Activities Center in Westover Park received approving comments from both staff and the community. Hott’s initiative — with support of the NRPA three pillars — helped to create a comprehensive pollinator program in Harrisonburg.

In mid-2018, city staff collaborated with a local nursery, James Madison University, and other private partners to create a pollinator committee. A work plan was created and the very first pollinator event was held at the activities center in February 2019. As part of the program, a pollinator corridor was established through the city following each cardinal direction. The corridors intersect at Liberty Park in the downtown district. As part of the city’s efforts to expand pollinator habitats along the corridors, Liberty Park was completely converted to a pollinator habitat in 2019. Many residents and visitors use Liberty Park as an educational center and a peaceful place for lunch downtown. 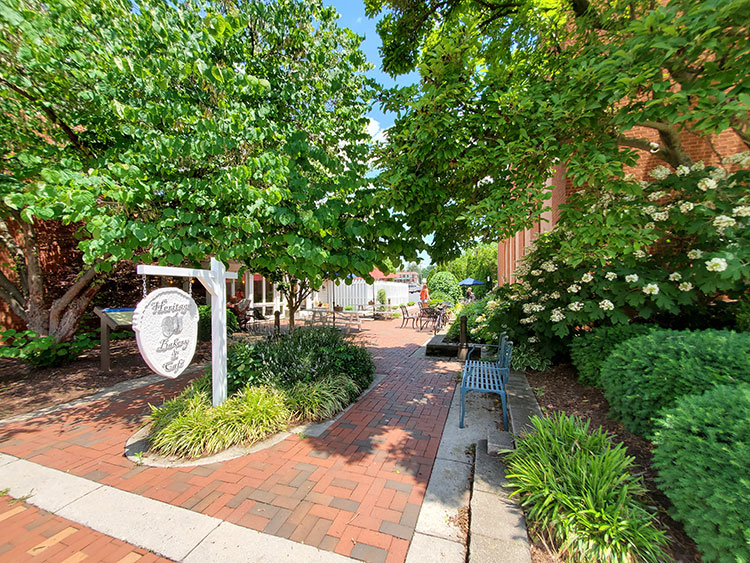 In conjunction with the new pollinator program, the city was also preparing for the arrival of the Emerald Ash Bore (EAB). This invasive jewel beetle had been progressively moving its way through Virginia’s Shenandoah Valley. EAB is usually not a huge impact on localities because ash trees are not a primary species in public settings. Unfortunately, however, ash trees made up 14 percent of the public trees in Harrisonburg’s parks. To date, the city has removed over 800 ash trees on public lands, leaving a large task to replant trees to fill the space and maintain the city’s tree canopy.

In response to this crisis, city managers decided to reclassify Park Superintendent Jeremy Harold as the green space manager. The decision was also made to transfer him and Hott from the parks maintenance team to the department of public works in January 2020.  This move has helped the pair to expand the pollinator program outside of the parks to cover the entire city and to create an Urban Wood Program

Following the move, Hott and Harold quickly made the decision to plant 4,000 pollinators in the downtown district last spring, just as COVID-19 arrived. Until that point, the pollinators had only been going into the parks. The decision to plant along the medians and in planter boxes downtown was made to brighten up downtown, as everyone sheltered at home during the pandemic. Some spaces were converted from annual landscape and other new sites were created by the public works maintenance crews. 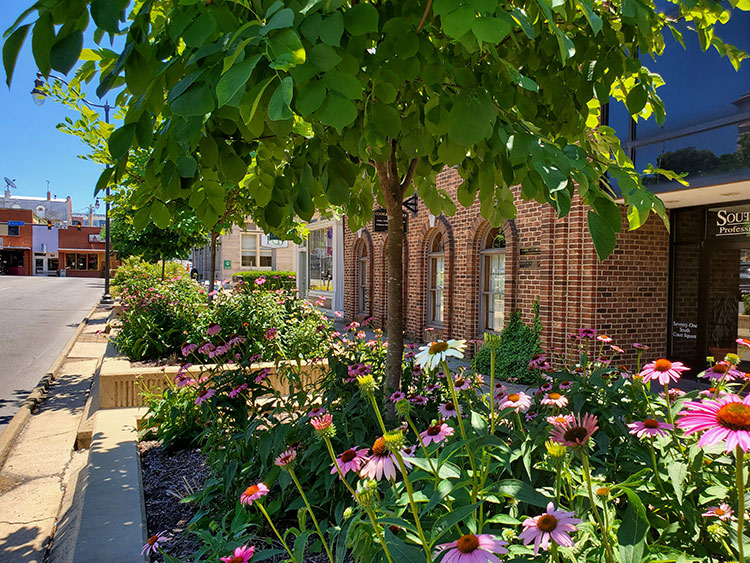 Planting pollinators downtown helped to not only connect the benefits of pollinators across the city, but also brought more visibility to the program. The team created a self-guided walking tour in preparation for Pollinator Week 2020.  This allowed citizens to enjoy the pollinators in full bloom as they came back out to downtown. A story map exploring the walking tours can be found at here. Following the addition of pollinator plants downtown, several adjacent businesses began adding their own planters and gardens around the outside of their buildings. 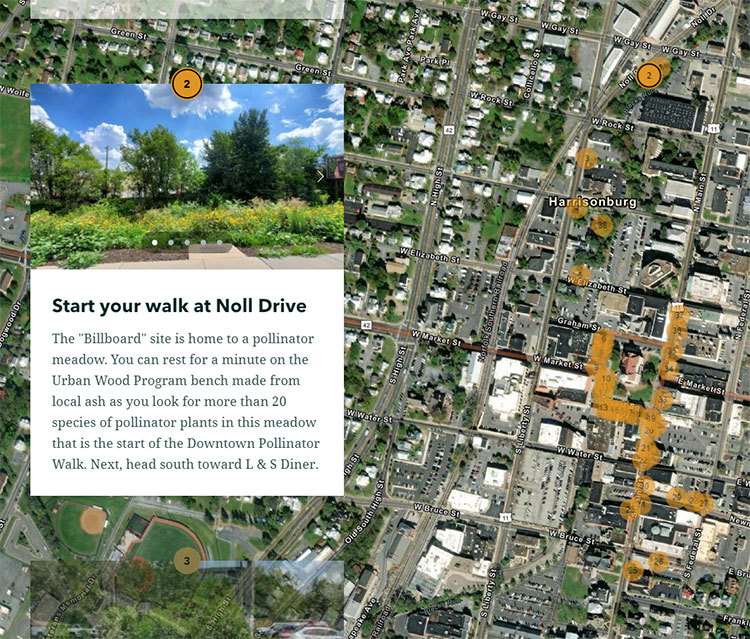 The spring of 2021 has started the fourth season of Harrisonburg’s pollinator program.  Hott has already installed several thousand pollinator supporting plants, such as coreopsis, echinacea, chrysogonum, monarda, rudbeckia and scabiosa, covering over 25,500 square feet in eight new locations this season. He already has his eye on a few more new locations to add in 2022.

The team celebrated Pollinator Week as the flowers came into full bloom.  Harrisonburg’s Pollinator Week consisted of guided walking tours, a film at the activities center childcare program, a photo contest and a “lunch and learn” at Liberty Park.

Staff was excited to learn about the National Recreation and Park Association’s Parks for Pollinators BioBlitz program. This event will help guide the program to further include pollinators throughout the entire park system. They look forward to participating this September during NRPA’s month-long campaign. “This program makes my job complete,” says Hott. “The best part about working with the pollinators is to engage with people as they walk by. The community has been very responsive to everything we are doing. It is very rewarding to see the pollinators come back each year with very little maintenance as they fill in.”

We are excited as we see more variety of pollinators in the parks and along major thoroughfares as more sites are established. The synergy is even carrying over to backyards and local businesses. You can see pollinator spaces popping up all over Harrisonburg as this program continues to grow. You can learn more about this program at https://www.harrisonburgva.gov/pollinators.

Join us and NRPA to raise awareness of pollinators nationwide by hosting a Parks for Pollinators BioBlitz in your community this September and you could win one of three $1,000 prizes or one of three Scotts Miracle-Gro prize packs to help with your pollinator habitats or programs!

Note: The Parks for Pollinators campaign, hosted through a partnership between the National Recreation and Park Association (NRPA) and The ScottsMiracle-Gro Foundation, aims to raise public awareness of the pollinator crisis and encourage local action through public parks and recreation. NRPA and The ScottsMiracle-Gro Foundation believe parks play a key role in protecting and preserving pollinators and their habitats. Together, as part of ScottsMiracle-Gro’s GroMoreGood initiative, they are working to educate more children, families and communities about the importance of pollinators and what people can do to help.

Kelly Adams is the outreach and communication specialist for City of Harrisonburg Department of Public Works.

Keith Thomas is the stormwater compliance specialist for City of Harrisonburg Department of Public Works.

Jeremy Harold is the green space manager for City of Harrisonburg Department of Public Works.