Parks and recreation is predominantly a service provided by local governments and therefore is reliant on financial support from local governments’ general tax funds. However, local governments fund and manage a variety of different public services, including, but not limited to, police protection, fire protection, transportation, education, public welfare and parks and recreation. Typically, these public services must vie for funding from the same limited pool of tax revenues. In the face of this competitive environment, many park and recreation agencies throughout the United States suffer from stagnant or declining budget allocations, despite the solid support for their offerings and services from Americans.

Due to the crucial role elected and appointed officials play in determining public expenditures, it is important for the park and recreation profession to understand how local government officials view and prioritize these services. To this end, NRPA partnered with Penn State researchers Dr. Andrew Mowen, Dr. Austin Barrett and Dr. Alan Graefe to conduct a nationwide study of local government elected and appointed officials. A total of 810 officials, from all 50 states, responded to the survey conducted during the spring of 2017. Their responses are the basis of this report.

Local government officials are heavy park users and are firmer believers in the great benefits that parks and recreation brings to their community. This includes:

Public officials also see park and recreation as a critical solution provider for many of their top concerns, including preventing youth crime and enhancing quality of life. But they do not perceive agencies as an important contributor to their biggest day-to-day concern: economic development.

This study highlights both a widespread appreciation and support of park and recreation services. But, the findings also underscore a sober reminder of the significant challenge that park and recreation agencies face in competing for needed budget dollars. 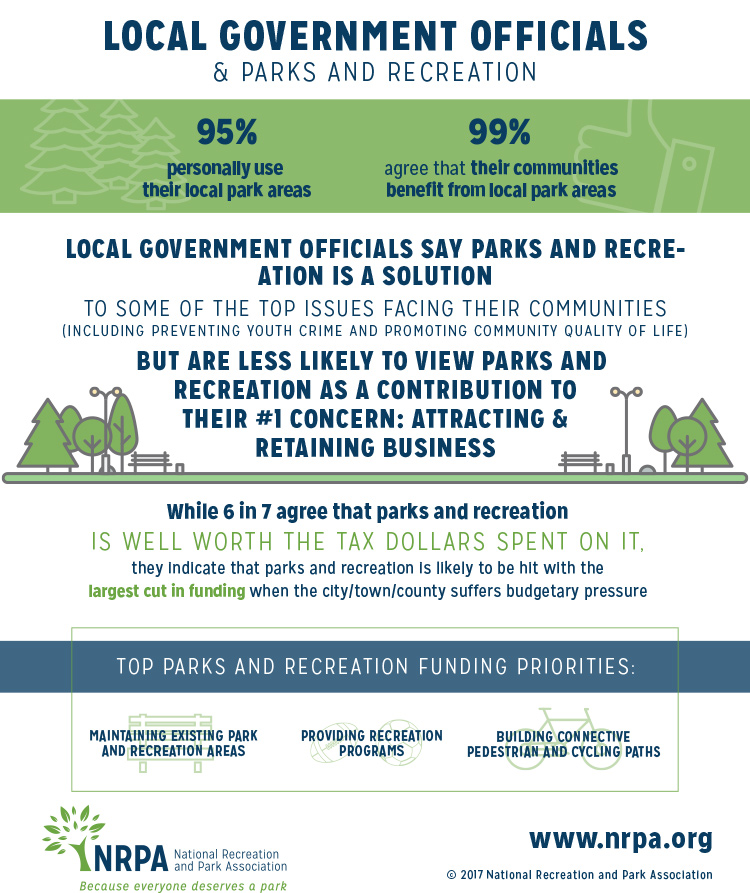 Community works together to get funding for park project