In April 2021, the field lost park and recreation leader Jack W. Moody. Named president of the National Recreation and Park Association (NRPA) in 1976, Moody first became an NRPA member in 1953.

He competed as a track and field athlete in high school and college, setting national records for the high jump and earning his place on national competitive teams. After spending time in the military during World Water II, Moody attended the University of North Carolina (UNC) and earned a degree in recreation. At UNC Chapel Hill he was part of the 1949 World Record Men’s shuttle hurdle relay team, leading to induction in the UNC Track and Field Hall of Fame and the University of Pennsylvania Penn Relays Wall of Fame.

Moody’s passion for recreation led to him overseeing the development of programs and facilities at several park and recreation agencies in Delaware (New Castle County) and New Jersey (Plainfield, Red Bank, Middletown Township and Somerset County) during his 33-year career in the field. During the 1970s, Moody taught park and recreation courses as an adjunct professor at Fairleigh Dickinson University in New Jersey. 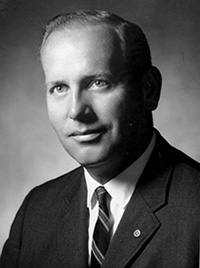 Foelsch remembers Moody’s expectation of high-quality work from his students, a standard that Moody held for himself, as evident by his work in the field. While serving as secretary-director of the Somerset County Park Commission, Moody had a vision and set a standard for the agency that can be seen today through the commission’s award-winning facilities, such as the Somerset County Environmental Education Center, The Green Knoll Tennis Center and Colonial Park. “RIP Jack. Thank you for the great legacy for Somerset County residents,” Foelsch says.

Moody served as director of the Somerset County Park Commission for 21 years, overseeing the agency’s growth to include five golf courses, acres of preserves and public recreation facilities, including an equestrian center, environmental education center, senior center and horticultural displays of rose and rock gardens, according to his obituary.

“We spent about 20 years putting together the park system, as he envisioned how it should serve our county residents and other visitors who used the parks,” says Bruce Keeler, retired employee of the Somerset Park Commission. “I will miss him. He was a great mentor and well respected within the park and rec field throughout the USA.”

Moody also was an active member of the New Jersey Recreation and Park Association, serving as president in 1958, and being recognized as honorary life member. He also was an avid golf player, fisherman and boater.

Moody was dedicated to the field and to NRPA, especially because of the dedication to health and wellness. According to Moody in the August 2005 issue of Parks & Recreation magazine, “NRPA is still relevant because no other national organization focuses on the broad well-being issues that people face in their daily lives.”