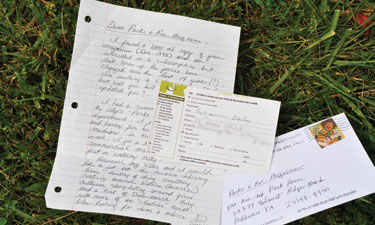 We hope the articles you read in Parks & Recreation are thought-provoking and engaging, and we want to hear your opinions on what you read in these pages. Through social media posts, website comments, emails to staff or posts on Connect, let us know how the magazine’s articles apply to your job and your agency.

While the Good Samaritan had very good intentions, it troubles me that she called the police because a female age 9 was left alone in the park. It troubles me because it shows how ill-informed parents are about kids spending time in their own community. Several reasons support my concerns, including: (1) According to the Department of Justice Juvenile Justice Division, crimes against children since the ‘90s have been steadily declining. This is especially true when it comes to violent crimes. (2) The 24-hour news media has inappropriately inflated how often serious crimes against children occur. The media unfortunately has decided to sensationalize the stories shared in order to increase viewership. When it comes to serious crimes against children, the number of viewers paying attention to that particular news story skyrockets. (3) The media loves to sensationalize stories because the media does not want to share all perspectives on issues and instead only show/tell the perspective that gets the most viewers. (4) Abduction, abuse and murder of children by strangers is relatively rare. (5) The most likely group to abduct a child is parents who are going through child custody battles. (6) In order of most likely to least likely when it comes to committing abuse whether physical, sexual or emotional is as follows: (A) parents (B) step-parents (C) direct relatives (D) extended family (E) coaches/teachers (F) religious leaders (G) strangers. (7) The order for those most likely to least likely for a child to be murdered is very similar to the order for the abduction of children. (8) The majority of “missing” kids are found safe with no harm done to them within the first 24 hours. Kids go “missing” all the time but that doesn’t make the news because it isn’t sensational enough and won’t get the viewership numbers the media are trying to achieve. (9) Kids are way smarter than most adults think they are and tend to be very good judges of character. (10) Children tend not to get abducted or abused in public places like parks, recreation centers and schools because of the “safety in numbers” principles. Kids get abducted or abused when they end up going in secluded or private places. (11) Basic stranger awareness lessons have proven to be MORE effective than ignoring these sensitive topics. (12) Each child is unique and the appropriate level of risk must be examined on a case-by-case basis. Most kids won’t ask to do something if they are not comfortable with doing it.

Comment on Associate Editor Samantha Bartram’s blog post, “Your Park is Your Family,” by Mark West, director of operations at ScoutingManiac, an outdoor recreation and adventure activities consulting firm located in Anchorage, Alaska

The most logical thing I ever heard on the subject came from an REI marketing campaign: “Humans are mammals. Mammals belong outside.” And when it comes to outside play, parents need to tag along as observers and followers (and paramedics if necessary)! Let your kids get dirty, challenge themselves, make their own discoveries. We are raising a generation of physically unfit, socially inept, paranoid children with no empathy or imagination. UNPLUG AND GO OUTSIDE!

Comment on NRPA Senior Manager of Fundraising Jessica Culverhouse’s blog post, “Let Them Play in the Park,” by Marcia Clausing, park board member for the City of Billings Parks, Recreation and Public Lands in Billings, Montana