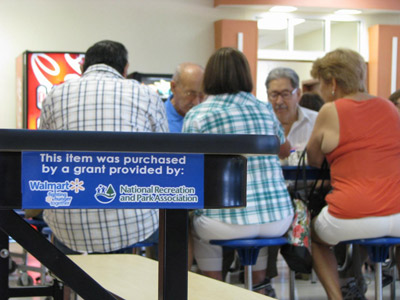 One of the highlights of working on Parks & Recreation magazine is visiting actual parks. Not parks in theory, but parks in practice, doing all of the things that parks do for their communities. Senior Editor Maureen Hannan wrote about her experiences at a DC Walmart summer feeding program announcement and at the Youth Health and Fitness Summit in St. Petersburg, Florida. Editor Phil Hayward discussed his recent explorations of the bike trail network in Missouri. My turn came with a trip to a place whose name I had not heard in decades—Hialeah.

In its heyday, the track at Hialeah, Florida, was the “Grand Dame” of the horse racing world, attracting celebrities and world leaders ranging from the Kennedys to the Rat Pack. But, like many race tracks around the country, it fell into decline and closed for several years. Now plans are in the works to revive the historic property, which recently began hosting races again, pending an economic upturn to give it a little jump start.

The actual city of Hialeah was not on my radar screen at all, until NRPA Senior Manager of Corporate Grants Jimmy O’Connor and I arrived to tour some of the summer feeding sites established with the help of Walmart grants and NRPA. Established in the 1920s, this bedroom suburb of Miami evolved into a largely Cuban-American community during the 1960s. Flat, rectilinear, and crammed with strip malls and blocks of tiny bungalows, Hialeah depends on its parks and recreation system to an extent that was eye-opening to this Washington suburbanite.

Feeding kids? Check. Feeding seniors? Check. Supervised and unsupervised sports? Check and check. Keeping kids off the street and active in the summer? Check. Keeping seniors active and socially engaged? Check. Counseling teens and providing community service opportunities? Check. Community theater? Check. Sports teams good enough to reach the state finals? Check. And at some facilities, all of these activities are going on at the same park on the same day. The suite of social services offered in Hialeah parks turned my notions of parks as primarily providers of passive recreation upside down.

The most vulnerable populations in Hialeah—the young, the old, and the at-risk teens—are lucky to have a capable caregiver in the Parks and Recreation Department. But it’s not that surprising, given how many of the park employees told me they grew up in Hialeah’s parks and now are returning the favor by providing recreational opportunities and vital social services to another generation.

The park system’s deep roots in the community are evident in every program at every site. Hialeah could have been a city with a hole in it where the track used to be but with the help of parks and recreation, it’s a real community with a caring heart.

Elizabeth Beard is the Managing Editor for Parks & Recreation magazine.