Millions of people benefit directly from their local park and recreation agencies in many ways—as gathering places to meet with friends and family, open spaces to exercise and reconnect with nature or as community resources where they can get a nutritious meal. We have always known that local and regional public parks add significant value and benefits to their communities in terms of Conservation, Health & Wellness and Social Equity. Beyond that, local and regional park agencies are also engines of economic activity in their communities.

How Much Does Parks and Recreation Contribute to the U.S. Economy?

More specifically, operations spending by local park and recreation agencies generated nearly $91 billion in total economic activity during 2015. That activity boosted real gross domestic product (GDP) by $49 billion and supported more than 732,000 jobs that accounted for nearly $34 billion in salaries, wages and benefits across the nation.

Further, local park and recreation agencies also invested an estimated $23 billion on capital programs in 2015. The capital spending led to an additional $64 billion in economic activity, a contribution of $32 billion to GDP, $21 billion in labor-related income and nearly 378,000 jobs.

These are the key findings from research conducted by NRPA and the Center for Regional Analysis at George Mason University for the Economic Impact of Local Parks Report.

Policymakers and elected officials at all levels of government should take notice. Investments made to local and regional parks not only raise the standard of living in our neighborhoods, towns and cities, but they also spark activity that can ripple throughout the economy. 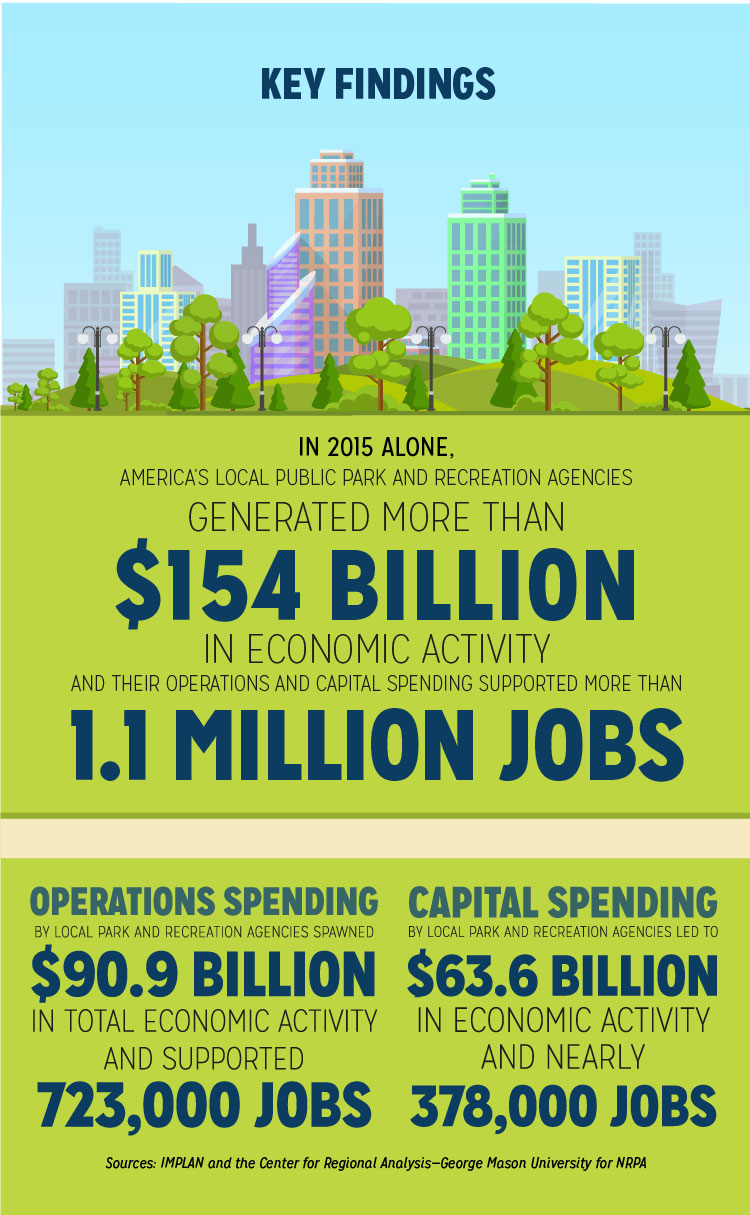 Help us spread the word about the economic benefits of local parks in your community! Below you will find talking points and a press release template that you can share with your local media contacts. You can also download customized flyers with your state’s economic impact numbers by clicking on your state in the map above.

In 2015, NRPA joined forces with the Center for Regional Analysis at George Mason University to estimate the impact of spending by local park and recreation agencies on the U.S. economy. Until then, there had been no national study to estimate the economic contribution of the thousands of local park and recreation agencies throughout the nation to the U.S. economy. Read a more thorough, technical discussion of the study here.

NRPA and the Center for Regional Analysis joined forces again in 2018 to update the landmark 2015 study. Both the 2015 and 2018 studies focused exclusively on the direct, indirect and induced effects local park and recreation agencies’ spending has on economic activity, with analysis based on data from the U.S. Census Bureau. Read a more thorough, technical discussion of the study here.

Philly's parks rebuild is off to a slow start

July 12: This webinar will bring together key players who have been leading the development of a new vision for Atlanta. Learn how they engaged key decision-makers and built upon an authentic community participation process.

NRPA's 2018 Economic Impact of Local Parks study empowers park and recreation professionals and advocates to speak with authority about the economic benefits of parks and recreation.