Charles F. McDevitt dedicated many years of his life to advancing public parks and recreation. The former Idaho Supreme Court justice passed away at the age of 89 in May 2021.

McDevitt was a former member of the National Recreation and Park Association (NRPA) Board of Trustees and served on NRPA’s Public Policy and Membership Affairs Committees. In 2004, he earned the NRPA Robert M. Artz Award for his efforts as an advocate to forward parks and recreation through education and activating the public in their communities.

Dedicating a Career to Service

McDevitt joined the U.S. Army in 1952, and was discharged with the rank of corporal in 1954. He went on to graduate from the University of Idaho College of Law and was admitted to the Idaho State Bar in 1956. The Bar honored him in 2012 as a distinguished lawyer, according to a News-Press & Gazette Company of Idaho Local News 8 article.

McDevitt was appointed to the Idaho Supreme Court in 1989, remaining on the bench through 1997, and becoming chief justice in 1993. In addition, he worked as a lawyer, businessman and legislator in the Idaho House of Representatives. He was a founding partner for two Boise law firms, Givens, McDevitt, Pursley & Webb; and McDevitt & Miller. He also served on numerous judicious and legislative committees, according to McDevitt’s obituary.

In addition to his leadership within NRPA, he also served as a leader on many other organizations, including as director of the Idaho Foundation for Parks and Lands; chairman of the Foothills Conservation Advisory Board, which protected more than 10,000 acres; director of the YMCA; and past president of the Boise Parks and Recreation Commission, the obituary says.

Influencing Health Through Parks and Recreation 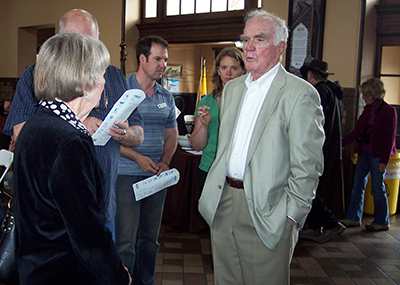 “Chuck’s imprint will forever be carved into Boise Parks and Recreation. There wasn’t a child Chuck didn’t want to keep busy with healthy outdoor activities. He cared deeply about all children, regardless of their background or circumstance,” says Boise Parks and Recreation Director Doug Holloway. McDevitt “single-handedly” raised funds to build the 150-acre Simplot Youth Sports Complex, he says. McDevitt also negotiated the “purchase and conservation of thousands of acres of Boise Foothills property.”

Holloway met and formed a friendship with McDevitt while they both served as commissioners on the Boise Parks and Recreation Commission. “I so admired his dedication to making Boise Parks and Recreation the health, influential organization it is today,” Holloway says. “His devotion of time and energy to so many department volunteer pursuits remains unmatched, and he was a tireless advocate for youth recreation in our community.”

McDevitt worked with Susan Eastlake and Doyal Wainser to expand the Les Bois Soccer Tournament and went on to design and build the 161-acre complex, now known as the Simplot Sports Complex. To honor his contributions to the Boise community and his commitment to providing sports and recreational opportunities to youth, Boise Parks and Recreation named a special use park featuring sports fields, a skate park, play areas, picnic areas and a fishing pond after McDevitt: the Charles F. McDevitt Youth Sports Complex, according to McDevitt’s obituary.

Serving as a Champion of Parks and Recreation and Great Leader

“Boise lost an incredible community champion and public servant with the passing of Chuck McDevitt,” says City of Boise Mayor McLean in the City of Boise Statement on the Passing of Charles F. McDevitt. “Boise is a better place because of Chuck…. Chuck’s wry humor, ability to challenge, speak frankly, and care deeply was unique, and I’ll miss him deeply.”

Scott Martin, executive director of the River Heritage Conservancy, remembers McDevitt as “a truly great leader and giant in the field of public parks and recreation.” He adds that McDevitt helped shape his career.

“No favor was too great, nor need too small. He was always there, with words of encouragement, an approving nod, insightful questions, a helping hand, leadership and, if necessary, the quiet dollar,” according to his obituary. Read more here.