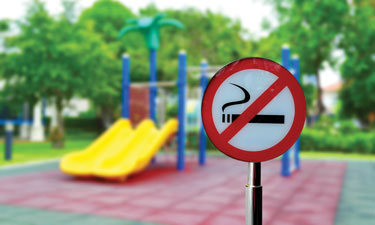 In an effort to recognize park and recreation’s growing responsibility in promoting healthy communities, this summer the NRPA Board of Directors adopted a statement encouraging the establishment and maintenance of tobacco-free facilities. This decision by NRPA’s leadership will protect the health of our workforce, visitors and the environment while aligning the profession with the views of forward-thinking cities, states and public-health officials.

In many communities, parks and outdoor public spaces act as a relaxing refuge for all. It is also quite possible that, for many users, these outdoor spaces may be the only available places to be in-touch with nature and enjoy access to clean, fresh air. Public outdoor spaces need to remain open and accessible, and prohibiting smoking in these areas will enhance the user experience while also benefiting the environment.

Across the country, municipal governments have passed ordinances banning smoking in public parks and on public beaches. The American Nonsmokers’ Rights Foundation reports that, as of July 1, more than 1,260 municipalities have tobacco-free park laws on the books. This includes a diverse list of big cities like Boston, Los Angeles and Houston, as well as smaller towns like Jasper, Alabama; Sylvania, Ohio; and Wellington, Colorado. According to Joe Turner, director of the Houston, Texas, Parks and Recreation Department, the city “needed help ensuring that we had the tools to prevent a range of antisocial behavior in our parks.” Turner, who was appointed director in 2004 and is soon set to retire, continues, “The smoking ban gave us the chance to work with our staff and the public health community to ensure all of Houston had access to safe, clean parks.”

As we are focusing on tobacco-free policies in parks and outdoor public spaces, it is important to understand who uses parks and what the public thinks about tobacco-free policies. A 2015 national study commissioned by NRPA found that 70 percent of both men and women use their local parks occasionally or frequently. Of those respondents, ages 15 to 55, more than 70 percent said they are at least occasional park users. Finally, 87 percent of those living in a household with five or more people reported using parks at least occasionally.

The usage statistics are important to note in the context of public opinion regarding public smoking bans and can be useful when making policy proposals. The polling organization Gallup has found the general public to be supportive of smoking bans in all public places, increasing from just 39 percent in 2001 to 58 percent in 2015. Drilling down further, Gallup found that 68 percent of women and 47 percent of men support bans, as well as 46 percent of 18-29-year-olds and 58 percent of 30-49-year-olds.

Local public opinion is more difficult to pin down, but a review of 89 public opinion surveys, published in 2015 in the journal Tobacco Control, showed that support for tobacco-free school-grounds and playgrounds is almost always above 80 percent. In addition, surveys conducted in several states focused specifically on parks and green spaces produced smoking ban support ranging from 34 to 60 percent. Much of the difference in support between bans involving “playgrounds” and “parks and green spaces” is likely because people tend to associate playgrounds with children, and are more likely to advocate keeping tobacco away from kids (although, to be sure, children are sure to be found in all the aforementioned settings).

Jumping on the Ban Bandwagon

Park and recreation departments should take advantage of widespread public support for tobacco bans in public spaces, as they can add to the efforts of local governments, businesses and public health experts to improve the well-being of citizens. Tobacco bans have proven particularly effective in terms of deterrence. A 2012 study published in Health & Space determined that, “banning smoking in parks was associated with a heightened perception of difficulty to smoke” among young adults, both smokers and nonsmokers. Deterring teen smoking should be a top priority because, according to the Surgeon General’s 2014 report on the effort to combat smoking, 87 percent of tobacco users start before age 18.

When it comes to parks and outdoor public spaces, however, the main purpose for instituting tobacco-free policies is to combat the damaging effects of secondhand smoke. In 2012, the CDC determined that roughly 58 million nonsmokers in the United States, and two out of every five children ages 3 to 11, were regularly exposed to secondhand smoke. Although parks and outdoor public areas are meant to be safe and healthy environments, the presence of secondhand smoke can make potential park-users shy away. In the long-run, a decrease in public support and park visitors because of secondhand smoke concerns could result in people being skeptical of funding for park projects if they believe that their concerns are being ignored.

There are also environmental and cost-savings benefits associated with tobacco bans. Cigarette butts are not biodegradable, meaning they will remain visible until they are removed. In fact, a 2011 study published in Tobacco Control estimated that “tobacco product litter” comprises up to 36 percent of all visible litter, with estimated removal costs ranging from $3 million to $16 million.

In August 2011, Philadelphia adopted a smoke-free regulation that covered all recreation centers, playgrounds, ball fields, courts and pools. Ultimately, the mayor signed an executive order directing the commissioner of the park and recreation department to adopt a smoke-free policy. Through various public outreach tactics, like handing out wallet cards with information on the new policy and engaging with visitors, support for the policy was strong. Since the regulation’s implementation, 222 public areas have been deemed smoke-free, along with 850 smoke-free acres and an estimated 3.6 million visits to park and recreation facilities that will be smoke-free.

On a smaller scale, Mecklenburg County in North Carolina instituted a smoking ban in all county-owned parks, greenways and park property. Various agencies coordinated communication campaigns to get the word out and offered information about help to quit smoking, like the QuitlineNC telephone hotline, a state-run service that provides callers who want to quit smoking with guidance and support.

Park and recreation departments and employees are uniquely positioned as they interact with community members and families on a daily basis, providing healthy places to play and enjoy the fresh air. Advocacy of tobacco-free policies in our parks and open spaces is the logical next step in the stewardship of community health and well-being.

Justin Hurdle is an Intern with NRPA’s Urban and Government Affairs department.