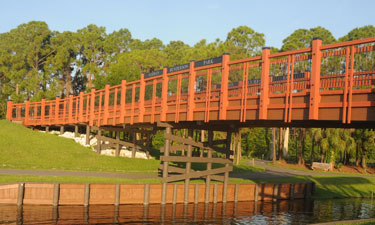 Hard-working and physically fit to the end of his life, Nathan Benderson rode his bicycle daily through an undeveloped borrow pit on his way to work. And every day, as he contemplated the large lake, overgrown with cattails and weeds with egrets and Sandhill cranes staking claim, he thought about what a diamond in the rough the property was, and how it could be transformed into something really spectacular for the community. In his mind’s eye, the visionary developer imagined a place where local residents could walk, bike, run and fish. What he didn’t plan on was that in just a few years, that borrow pit would become not only a beautiful Sarasota County park, but one of the world’s foremost rowing and event venues.

Nathan Benderson Park (NBP) is situated in the northeast end of Sarasota County. The land, originally an active shell excavation pit for road construction fill, was purchased by Sarasota County in the early 1990s and was known as Cooper Creek Park. The surrounding area was being developed into a retail destination, when Benderson’s company purchased an adjacent 101-acre easement from the county and agreed to develop it, along with the existing Cooper Creek Park, into a community asset. This plan, subject to county approval, would incorporate Benderson’s vision of health and wellness and would be a wonderful asset designed for residents to enjoy.

As plans for the park were underway, several local rowing entities began testing the waters and concluded the lake on the property was a great place to row and compete. Subsequently, two regattas were successfully hosted at the location in 2009 and thereafter, planning for a rowing facility at the site began. The Suncoast Aquatic Nature Center Associates, Inc. (SANCA), a nonprofit organization created to manage the park, was born in 2010 in conjunction with Sarasota County Government. As additional regattas were hosted at the park, it became apparent the spot was a special place, and with additional research, could become a premier rowing venue within a community park.

While construction began on the new park in 2011, representatives from SANCA and the county visited and assessed top rowing venues to identify the characteristics and amenities they deemed necessary to make NBP one of the best facilities in the world. They consulted with the World Rowing Federation (FISA) on design and implementation so the park could qualify as a FISA-certified facility. It was determined the work to be done would include dredging the lake to deepen and lengthen it; building an island (now Regatta Island), a bypass canal, a custom-designed wave attenuator, vehicle bridges and pedestrian bridges; and making it ADA compliant. This work was all completed in 2013.

From Borrow Pit to World-Class Venue

Through partnerships and investments by Sarasota County, the state of Florida and the Benderson Family, NBP has been transformed into a premier rowing and sports venue as well as a wonderful community park. Today, NBP shines as a master-planned, world-class rowing facility featuring a 2,000-meter sprint course and aquatic sports center. It’s a unique, dog-friendly, 600-acre public park that grants access to the 400-acre lake and offers something for everyone to enjoy — miles of dedicated walking, running and bike trails, fishing and direct water access for sports such as paddle boarding, kayaking, canoeing and rowing. Furthermore, NBP provides regular programming such as dragonboat paddling and learn-to-row classes for different skill levels, equipment rentals and community outreach programs.

In just a matter of years, NBP has generated a significant positive economic impact on the area. The park held more than 45 events in the 2015-2016 season and welcomed more than 50 teams to train. It has played host to, or will host, many local, national and international events, including:

The future is extremely bright for NBP and great things continue to happen there. The award-winning design of the finish tower is currently under construction and expected to be completed by early 2017; the new children’s playground is a perfect gathering place for families; and plans for a boat house are in the works. With the intent to roll out more activities like cultural performances, health and wellness fairs, increased youth and college sports competitions, and numerous international competitions that put the park in the local, national and international spotlight, Nathan Benderson Park is well on its way to being recognized as America’s premier rowing course and a jewel in the Sarasota County Parks system.