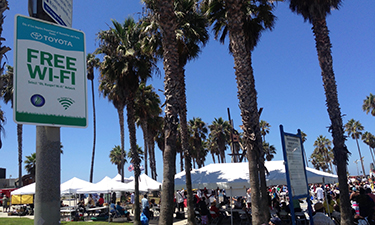 This is awesome! I can sit outside in the park and get my work done while watching the kids play. It’s so much better than being stuck at home in front of my computer or going to a fast food restaurant to get free Wi-Fi.

The city of Los Angeles, along with a growing number of local, state and federal agencies, has committed to bring free Wi-Fi to public spaces. The pilot program in Los Angeles has already been embraced by the public, with iconic locations such as Venice Beach and Griffith Observatory now offering this free service. Wi-Fi is no longer considered an amenity, but rather a public utility, like electricity and running water. If you don’t believe it, just ask any millennial or the parent of a young child.

In order to offer Wi-Fi to your visitors, there are two primary needs: high-speed broadband (i.e., an internet connection) and constant electricity to power the system. With this in mind, there are several questions that invariably arise:

The city of Los Angeles partnered with American Park Network to install free public Wi-Fi in multiple locations, including the famed Venice Beach and Griffith Observatory. The primary goals are to provide enhanced visitor services, increase visitation and ultimately get people to spend more time outside. In addition, the Los Angeles Recreation and Parks Department sought to leverage many of the following benefits:

Millions of Angelinos have had the opportunity to use this new service, which is very popular. An average of more than 20 percent of devices connect to the system when in the Wi-Fi hotspots for five minutes or more. At one park with limited cell coverage, the connection rate is as high as 36 percent!

One of the Most Requested Services

In Los Angeles, all equipment, installation and ongoing maintenance has been made possible through a public/private partnership. Michael A. Shull, general manager, Department of Recreation and Parks, was instrumental in making this program come to life. “It’s been very rewarding to collaborate with American Park Network with support from Toyota to bring free Oh, Ranger! Wi-Fi™ to park visitors,” says Shull. “We look forward to expanding Wi-Fi services throughout our entire park system. Bringing connectivity to parks enhances community offerings and gives everyone an incentive to spend more time outdoors.”

New York State has a similar public Wi-Fi initiative, bringing free connectivity to iconic spots like Niagara Falls and Jones Beach. State Park Commissioner Rose Harvey echoes Shull’s sentiment, adding that free Wi-Fi is a way to appeal to younger constituents, who often make their choices based on their ability to connect. “Whether opting to use Wi-Fi to share real-time photos of friends and family or to access apps and maps, having this technology is another way to draw people in to spend their precious leisure time at our parks,” says Harvey.

“In Arizona, connectivity is one of the most requested services,” says Sue Black, director of Arizona State Parks. “The park community needs to take a leadership role and set the standard for the public.” Arizona is currently working with concession partner Aramark to install free public Wi-Fi in popular destinations like Kartchner Caverns and Patagonia Lake State Park, with plans to expand the service throughout the entire system.

Ultimately, the key for parks isn’t to have Wi-Fi everywhere, but rather to offer visitors the option to connect in well-defined, high-traffic locations. That option can make all the difference in getting people to show up and share their experiences. In many respects, it’s similar to offering showers at campgrounds. There was a time when a hot shower at a campground was a luxury. Today, visitors consider it a necessity but would likely trade a hot shower for a reliable internet connection any time.

Mark Saferstein is the Publisher and Editor-in-Chief at American Park Network.