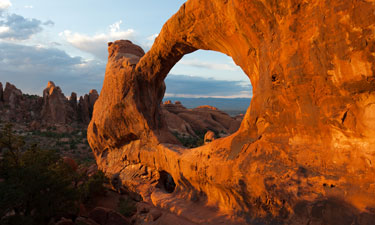 In an often-cited 1983 commentary, Wallace Stegner, Pulitzer Prize-winning novelist and environmentalist, proclaimed, “The national parks are the best idea we ever had. Absolutely American, absolutely democratic, they reflect us at our best rather than our worst.” On this 100th anniversary of the National Park Service (NPS), it is appropriate to examine Stegner’s proclamation in the light of history, and discuss the significance of the national parks to our American way of life.

We begin by harkening back to the evening of September 19, 1870, and a campfire conversation attributed to members of the Washburn-Langford-Doane expedition. This group of Montanans had traveled south from Helena to the region we know today as Yellowstone National Park to witness for themselves what early explorers had described as a wondrous collection of thermal peculiarities bubbling up through the Earth’s crust. As Horace Albright, the second director (1929-1933) of the NPS tells the story, at this last evening’s encampment near the confluence of the Gibbon and Firehole Rivers, or what we know today as Madison Junction, the conversation turned to how the area might be divvied up among the expedition’s profit-minded entrepreneurs. But one member of the party, a lawyer named Cornelius Hedges, suggested a higher purpose for Yellowstone’s thermal wonders. They should be protected, he said, in the form of a national park for the benefit and enjoyment of the people. The idea caught on and, soon thereafter, President Ulysses S. Grant affixed his signature to the Act creating Yellowstone National Park — our first national park — on March 1, 1872.

The campfire creation story has been repeated countless times throughout NPS’ history, and it has been warmly received by generation after generation of Americans visiting Yellowstone in the glow of their own campfires and interpretive programs. The story conveys a sense of altruism and high ideals that elevate our democratic aspirations. It also casts the national parks — again using Stegner’s words — as an important part of the “geography of hope” that helps bind us together as a nation.

When the NPS was established August 25, 1916, the Organic Act defined the NPS mission thusly: “. . . to conserve the scenery and the natural and historic objects and wildlife therein and to provide for the enjoyment of the same in such manner and by such means as will leave them unimpaired for the enjoyment of future generations.” The charge was to protect and preserve the nation’s “crown jewels” while simultaneously making them available for public use. This dual and somewhat conflicting mandate has been the source of ongoing discussion and debate throughout the NPS’ 100-year history. Guaranteeing public access to national parks has brought with it a variety of impacts that increasingly threaten to impair what the NPS is duty bound to protect — the scenery, natural and historic objects, and the wildlife therein. There has been, is, and will likely always be managerial tension revolving around what has come to be known as this “preservation-versus-use” issue.

The first half of the 20th century was devoted largely to the expansion and development of the national park system. Early on, NPS’ challenge was to secure public support for the national parks by encouraging access, building facilities and making the parks inviting tourist attractions. Railroads brought visitors to the parks and large hotels, like Old Faithful Lodge in Yellowstone, the Ahwahnee in Yosemite and El Tovar on the south rim of the Grand Canyon, ensured that a visit to the national parks could be both enjoyable and comfortable.

The Great Depression had little effect on the national parks because the NPS had been poorly funded since its inception. Conrad Wirth, the sixth director (1951-1964) of the NPS, described his mid-20th century strategy for securing additional park lands as a “beg, borrow and steal” philosophy, because the NPS was prohibited from using federal funds to create new parks. Despite such obstacles, a tradition of continually expanding the size and scope of the national park system continues to this day as both Democratic and Republican presidents typically add to the system at the end of their final term in office to enhance their legacies.

Although the national park system grew throughout the first half of the 20th century, visitation was modest because the American public was largely immobile until after World War II. Then, equipped with more discretionary income, more discretionary time and more knowledge about available opportunities, an increasingly mobile citizenry began to grow into what historian Foster Rhea Dulles called its “recreational heritage.” An explosion of new-found interest in the national parks led Director Wirth to launch Mission 66 in 1956, a 10-year program to expand the national parks’ infrastructure to accommodate burgeoning demand, the conclusion of which was to coincide in 1966 with the 50th anniversary of the establishment of the NPS. Images of Dinah Shore’s “See the USA in your Chevrolet” were ever-present on television throughout the 1950s and 60s as Americans began visiting their national parks in earnest.

Problems in the Parks

In the second half of the 20th century, national park visitation accelerated with increasing impacts on environmental quality and the quality of visitor experiences. Managerial terms like “recreational conflict” and “recreational carrying capacity” made their way into the nomenclature, and recreation’s problematic side revealed itself. Costs, as well as benefits, flowing from the public’s enjoyment of their national parks became increasingly evident and management issues throughout the system took a variety of forms, including automobile congestion, air pollution, snowmobile controversies and overflights in the Grand Canyon, as well as avant-garde recreational activities like hang gliding, base jumping, wingsuit flying and other expressions of the “right” of citizens to enjoy their national parks in whatever manner they pleased.

Fueling managerial tensions was a dualistic view of national park stewardship that had existed since NPS’ establishment in 1916. The Organic Act’s language separated people from nature. The Act conveyed the message that people were to be visitors to the national parks and that in their pristine condition the parks should be largely devoid of human influence. This view ignored a long history of human presence in places such as Yellowstone, Yosemite, Grand Canyon and Everglades National Parks. In the light of history, dispossessing native peoples from their homeland to create national parks now seems unjust. Indeed, some contemporary critics of the national parks view their creation as a social construction of a dominant Western European culture more so than a laudable expression of a universal ideal. Such criticism reminds us that the history of the national parks is more marbled than we typically care to admit and that architects of the national park system did some harm as well as good along the way.

This criticism also speaks to the increasing challenge of sustaining support for the national parks from a highly urbanized and culturally, racially and ethnically diverse citizenry that has become more and more detached from the natural world. If, as some social scientists contend, children who grow up separated from nature become adults who are indifferent toward nature, where will support for the national parks come from in the future?

The Future of the National Parks

As we begin the 21st century, the significance of the national parks to our way of life is an important question to ponder. Parks are “islands of hope,” William Brown proclaimed, but his words no longer resonate like they once did. First and foremost, ecology teaches us that we cannot simply draw political boundaries around national parks and look after them as if they were separate from everything else. National parks are intimately connected to places and people beyond their borders, and park managers now understand that they can no longer manage the national parks in isolation. The NPS’ 16th Director, Fran Mainella (2001-2006), epitomized this orientation to service. She understood that all Americans must come to see themselves as the primary stakeholders and custodians of their natural and cultural heritage.

Given the increasingly diverse makeup of the American people, the magnitude of NPS’ administrative challenge is daunting. Chris Jarvi, former associate director of partnerships and visitor experience for the NPS under Mainella, reported that when asked on a survey why they hadn’t visited their national parks, an all-too-frequent response was, “Because I don’t see anybody that looks like me.” How, then, can we make the national parks more relevant to an increasingly multicultural citizenry’s lived experience?

Part of an answer rests in expanding NPS’ presence in urban areas where 80 percent of Americans live. Devoting more attention to our human-centered, as well as nature-centered, heritage is essential, as is tying human-centered and nature-centered stories together in ways that illustrate their ongoing mutual interdependence. This requires that the NPS play a leading role in teaching us about the ecology of our lives.

Robert Stanton, the 15th director (1997-2001) of the NPS, exemplifies the possibility for making the national parks more relevant to contemporary life. An African-American born into poverty in rural Texas, Stanton attended a historically black college in Houston where he was given the opportunity to work in Grand Teton National Park under a minority recruitment program initiated by then-Secretary of the Interior, Stewart Udall. In the ensuing years, Stanton made the most of his opportunity, and he rose through the ranks to eventually become director of the NPS. Reflecting on his earlier tenure as deputy director of the National Capitol Parks Region in Washington, D.C., Stanton remarked that, “One activity that sets the National Capitol Region apart from other regions are the special events — in particular, citizens from all walks of life and all regions of the country exercising their right to freedom of speech.” Stanton’s life has been an individual expression of the larger society’s moral growth and development. Just as our nation moved from segregation to integration, from civil unrest to civil rights, so too has Stanton personified the expansion of our liberal democratic tradition. His life, like NPS’ life, like our nation’s life, is testimony to the possibility that imperfect people can aspire to a more perfect union.

It is perhaps best if we think of the NPS, just like our country, as a work in progress. It is in the process of becoming a better organization in the same way we are in the process of becoming a better country. The NPS will undoubtedly evolve and change with the times as we learn more about American history and as we make good-faith efforts to learn from past mistakes. The NPS’ goal should be to become the best possible public service agency, just as our country’s goal should be to become the best possible democracy. The NPS, among its many duties and responsibilities, is obliged to help us get our nation’s story straight. This requires owning up to its failings, as well as the failings of others. Treating history respectfully is its obligation, and revising and building on what history has taught us is its job. To the extent the agency carries out this responsibility conscientiously, the light of history may yet one day credit the NPS with overseeing what has truly become one of America’s most enduring and best ideas.