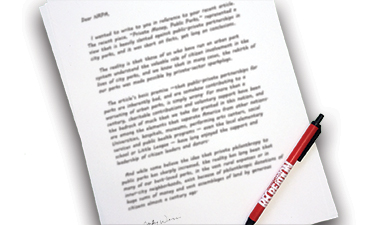 We hope the articles you read in Parks & Recreation are thought-provoking and engaging, and we want to hear your opinions on what you read in these pages. Through social media posts, website comments, emails to staff or posts on NRPA Connect, let us know how the magazine’s articles apply to your job and your agency.

Thank you for featuring “The Drones are Coming” in the March 2015 issue of Parks & Recreation magazine. In recent months, the Academy of Model Aeronautics (AMA) has been working closely with NRPA to promote the establishment of flying sites in parks across the country. Your article points to the AMA as an ambassador for the sport of model flying, and the connection the organization has with recreational users throughout the country.

A model-flying hobbyist who enjoys flying the new types of small unmanned aircraft systems (sUAS) can apply the rules found in the AMA Safety Code, which boasts 75 years of success. The AMA has also partnered with leaders in the industry including Association for Unmanned Vehicle Systems International (AUVSI) and the Small UAV Coalition to develop a program for new hobbyists called “Know Before You Fly.” The FAA is partnering with the founding members of this program to spread the word about safe and responsible flying. Know Before You Fly is an educational campaign that provides prospective users with the information and guidance they need to fly safely and responsibly.

The AMA encourages the establishment of model aircraft flying sites to give hobbyists a safe place to fly. We encourage you to visit their website to learn more about the benefits of flying sites. Additional information will be shared at the NRPA 2015 Annual Conference in Las Vegas, Nevada in September 2015.

Email from Tony Stillman, Flying Site Assistance Coordinator with the Academy of Model Aeronautics regarding Vice President of Conservation and Parks Richard Dolesh’s March feature article, “The Drones are Coming.”

[Ed. Note: We received great feedback about Linda Oakleaf’s April 2015 article, “A Virtual War.” The piece explored the finer points of Ingress, a virtual game Oakleaf describes as “a combination of geocaching and capture the flag.” According to our readers, it’s also a fun and exciting way to blend outdoor time and technology in our community parks. Below, we share three of their comments.]

It’s worth downloading the game and having a walk around your park. Players have a goal of being within 40 meters of intended locations, and if something is strongly defended, they are forced to stand directly at the object — you would be fine standing next to a sculpture or you might have an issue standing in a bed of flowers. It’s also worth noting the placement of portals versus drive paths. If cars are allowed in your property area, they may be playing while driving, and if they want to get the full value out of a round, they will make the loop four times. If you enjoy the opportunity of having players come out, do reach out to the local [Ingress] community, which is very easy. They will appreciate any guidance of being welcomed to the area as well as understanding rules if it’s a big problem to be in the area after dusk. If you have a paid facility, consider group discounts for Ingress players in large numbers. This applies to zoos, arboretums and so forth. To play the game effectively, it can take eight-plus players working together, which on a nice afternoon out can turn into 20 or 30 people all wanting to join in. There are also monthly events which have the possibility of breaking 100-plus people. I’ve played this game for two years and am an organizer for the local 10-100 person events, and it’s always great to have buy-in from the location we are at.

As an avid Ingress player, this article is right on the mark. Ingress players are already in your parks whether you know it or not. Connecting with their communities and taking an active role in encouraging them to be part of your park system can be mutually beneficial. Plus, many Ingress players look for service opportunities in the communities where they play. If you are able to establish a relationship with your local teams, they may volunteer to give back to the community!

As an Ingress player, this article makes me really happy. Oftentimes what we do looks really suspicious. The more people know that we’re just playing a game, the better. And please, if we’re somewhere we’re not supposed to be, tell us! We probably didn’t know, and while it’s a really fun and engaging game, we all know that it’s not worth injuring ourselves or getting fined/arrested for.