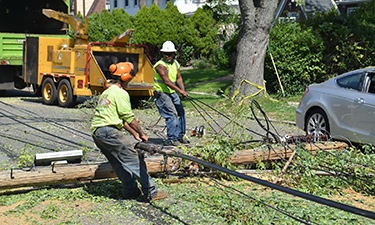 Blizzards, heat waves and hurricanes are but a few of the many severe weather events with which park and recreation departments cope on a regular basis. This is why disaster planning is a top priority for agencies in cities like Chicago, New Orleans, New York City, the Parish of East Baton Rouge and Seattle.

Parks & Recreation magazine plumbed these agencies’ vast knowledge of and experience with severe weather to compile the following seven tips for when disaster strikes.

Tip 1: Plan for a Range of Scenarios

Severe weather comes in all forms and requires cross-departmental responses. That’s why the New York City Department of Parks and Recreation (NYC Parks) belongs to “a dozen different plans” in cooperation with other city departments, says Michael Dockett, the New York Assistant Commissioner for Urban Park Service. For instance, there’s a Coastal Storm plan: “When Hurricane Sandy came through, that plan was enacted,” he said. Each of these severe weather plans compiles the likely damage and risks associated with each specific weather threat and how best to deal with it.

To cope with severe weather, park and recreation departments need everything from emergency food supplies and shelter for staff to sandbags, generators, chainsaws, drywall, 2-by-4s and plastic sheeting to patch roofs and walls. Whatever supplies their disaster plans require, the key is to have everything procured and stored across various locations well in advance. This includes portable two-way radios integrated with the city’s own network, because cellular networks tend to overload or fail during natural disasters.

Seattle’s Parks and Recreation Department helps neighborhoods set up their own emergency response groups equipped with kits of emergency supplies and their own two-way radios. “We let volunteer groups store boxes of radios in our recreation facilities, and use these buildings as communication hubs when emergencies occur,” says Patti Petesch, Seattle Parks and Recreation’s emergency management manager.

Tip 3: Use a Scheduled Approach to Plan Implementation

Having endured more than its fair share of severe weather, the City of New Orleans Recreation Development Commission (NORDC) takes emergency preparedness very seriously. Mindful that it takes time to put an emergency plan into action, NORDC has structured its tactics based on the clock — namely, tasks that need to be done 72, 48 and 24 hours before severe weather arrives. This approach balances preparing for the storm with directing deployment decisions. “By the 48-hour window, we usually have a pretty good idea of what kind of event we are looking at,” says Mary-jo Webster, COO at NORDC.

The middle of a hurricane is no time to figure out who should be doing what. Positions and responsibilities should be assigned and trained for long before the clouds start to gather. (Training should be repeated on a regular basis, to keep staff sharp.) Also, management should decide which staff will be sent home during severe weather events, who will be recalled and on what schedule after the storm passes, and should ensure that full contact information is available for employees and their families.

It is vital to allow department staff members enough time to prepare their families, food supplies and homes for what’s coming, bearing in mind that some staff will be working right up to the storm and into it. Meanwhile, ensuring staff safety must be paramount throughout the planning process and maintained as a guiding principle when severe weather arrives.

The Recreation and Park Commission for the Parish of East Baton Rouge (BREC) is an independent state-created body that manages public park and recreational properties in Louisiana’s East Baton Rouge Parish. BREC has its hands full preparing for severe weather and mitigating its effects. “With more than 180 facilities, getting everything checked after a storm can be challenging,” says BREC Superintendent CEO Carolyn McKnight. To make reporting easier, BREC has a post-storm-event spreadsheet that gives specific park inspection assignments “to each one of our maintenance shops and other departments,” she adds. “This list is based on several factors, including locations of shops and even the proximity of employees’ homes in relation to our parks.”

BREC also maintains a “Hurricane Supply Room” with items such as “chainsaws, generators, dehumidifiers and safety supplies to help aid in post-storm management,” McKnight says. “These items are only used in emergency situations and are immediately returned so they don’t get lost in time of need.”

It may seem like a no-brainer, but park and recreation departments need to ensure that all of their vehicles, generators and propane heaters are topped off with fuel before severe weather hits — and that they have access to extra fuel should these supplies run out. In the Parish of East Baton Rouge, “we have on-site fuel storage tanks at several of our shops to be able to keep fuel in stock until deliveries can begin again,” says McKnight.

Severe weather emergencies don’t always provide adequate lead time, as was the case in Chicago during the summers of 2012 and 2015. “On August 4, 2012, the city’s Office of Emergency Management and Communications and the Chicago Park District were forced to evacuate thousands of concert goers from the grounds of Grant Park during the Lollapalooza Festival due to approaching storm warnings from the National Weather Service,” says Patrick Levar, Chicago Park District’s COO. “Three years later on August 2, 2015, a severe thunderstorm warning led to another evacuation.” Fortunately, pre-planning paid off: “In each instance, fans were directed to three nearby designated emergency shelters,” he says.

This is the final lesson for severe weather planning: Life-threatening storms can hit without warning in a matter of minutes. Only by keeping an eye on the skies — and listening to the latest weather reports — can park and recreation agencies stay ahead of severe weather.

A $16 Million Hail Storm in the Windy City

Immediately following the storm, CPD initiated cleanup efforts and installed temporary winter protection to protect plants and people. After that, the agency began a “phased hail damage recovery” program at the Garfield Park Conservatory “to assure the viability of this facility for years to come,” says Levar. Beyond installing 1/4-inch-thick laminated glass to replace almost 52,000 glass roof panes, CPD reconditioned and strengthened the various room’s concrete and streel structures, removed and repaired cypress wood beams in the roof framing, and inspected the roof drainage and gutter system for problems. The full repairs were completed in time for the official reopening on April 22, 2015, which happened to be Earth Day.