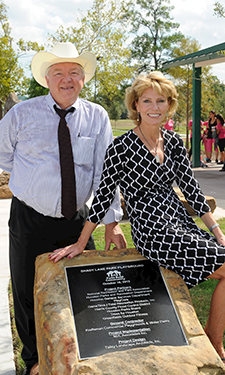 Of all the rewards of a successful Congress, perhaps there was none more meaningful than the completion of the Parks Build Community project at Shady Lane Park in Houston this year. This once-dilapidated park in an underserved community of north Houston had very minimal facilities, but it was heavily used by the community. Over the past year and a half, NRPA, in partnership with the Houston Parks and Recreation Department (HPARD) and a number of other partners, completed a makeover of this park unlike any other I have ever seen.

The first time I visited Shady Lane in early 2012, I was struck by the vitality of the community surrounding the park. People just loved this park, and they went to great effort to visit it, many on a daily basis, most of them on foot along well-worn dirt footpaths that all the local residents refer to as “goat paths.” Mothers with baby carriages, families with kids, seniors with friends — all used the park’s fields, trails and small community center from dawn till dark.

So, when Joe Turner, director of HPARD, recommended this site as his top choice for the Parks Build Community project for 2013, we knew that the potential for this project to transform the life of this community was unlimited. We saw this as a project that perfectly captured the intent of NRPA’s three pillars — conservation, health and wellness, and social equity.

After more than 12 months of community engagement, participatory design and sustained effort by the HPARD staff, contractors, donors and partnering organizations, the vision for this park has come true. Shady Lane is now a vibrant urban park with a stunning nature-themed playground complete with a splashpad for kids, a bayou boat much like the ones that once plied the waterways near Houston, a larger-than-life-size alligator, a treehouse climber, an overlook onto a large-scale environmental wetland restoration project and more. The interpretive displays and signs, the nature-themed play equipment, the adjacent green infrastructure project for stormwater management and the trail system all exemplify the ways that an urban park can be a catalyst for learning about conservation, for getting healthy and staying fit, and for building social equity.

The especially innovative and creative design plan was produced by Merrie Talley, principal of Talley Landscape Architects of Houston. The play climbers and features were designed, fabricated, and in large measure, donated by PlayCore, a company that has supported the Parks Build Community initiative with generous donations since its inception. Other firms and organizations also stepped up with major donations, including Greenfields Outdoor Fitness, the Houston Parks Board and Trees for Houston, as well as a number of other local and national businesses that contributed. In all, there was more than $500,000 of direct and in-kind donations to this Parks Build Community project. It was a remarkable outpouring of support that only grew larger as the park took shape.

It was truly gratifying to see more than 200 NRPA members board shuttle buses from the convention center to come out to the park for the dedication ceremony. They joined more than 250 people of all ages who were there from the local community — it was standing room only.

One of our NRPA staff members who attended the dedication remarked how “it was evident that the community was just teeming with love and pride for this park and playground — and they deserve it.”

As I walked the new trails after the ribbon-cutting toward a constructed overlook that looks out over Bretshire Basin, a transformed wetland area that does double duty as a flood-control project, I wove in and out of the fantastic new play structures, passed by the new fitness equipment and stopped at the educational displays, and I happened to overhear two women from the community who were walking nearby. One said, “You know, this park is a miracle.” There could not be a greater testament to how Parks truly do Build Community.

I would be remiss if I didn’t acknowledge the tremendous contributions that Rich Dolesh, NRPA’s VP of conservation and parks, continually gives to this effort. Rich’s enthusiasm and expertise is unmatched when it comes to NRPA’s Parks Build Community projects. We are indeed lucky to have him!