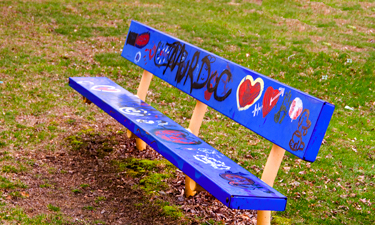 When graffiti appears in parks, on bridges or in other public spaces, those who see it often roll their eyes and mutter, “Teenagers.” But in Idaho Falls, Idaho, one teenager is doing the exact opposite of defacing public property. With the help of his mentor, 18-year-old Patrick McIlwain has used lasers to remove graffiti along the city’s greenbelt.

McIlwain, a senior at Bonneville High School in Idaho Falls, wanted to incorporate laser technology into his senior project, which is a requirement at his high school for graduation. His father works at the Idaho National Laboratory (INL) and mentioned this to colleague Bob Fox, an INL chemist who has worked with lasers on a variety of applications. Fox and McIlwain began collaborating on plans for the project and soon contacted Greg A. Weitzel, director of the Idaho Falls Department of Parks and Recreation, who supported the innovative solution to his parks’ nagging problem.

"I think it's a great way of trying to remove graffiti, which is definitely an issue we have," Weitzel says. "We usually paint over it, but you can never get that paint to match. To have a laser come in and remove it is just an awesome idea. I'm interested in using this going forward."

In late September, Fox and McIlwain borrowed a 100-watt laser from Adapt Laser Systems, and after discussing the scientific principles involved, they went to work on the greenbelt, which runs for six miles along the Snake River in downtown Idaho Falls. To protect bikers and joggers from the laser’s beam, they erected reflective barriers before setting up the machine. Fox guided McIlwain through the process, which quickly stripped the paint from a variety of surfaces that had been vandalized along the greenbelt. The job required a certain amount of finesse, and Fox talked McIlwain through properly positioning the machinery to achieve the appropriate amount of power without causing additional damage to the park’s property.

As the laser hits the graffitied surfaces, photons vaporize the paint. Laser technology at different wattage levels can be used to strip paint off of ships, repair defaced monuments or restore damaged artwork.

McIlwain, who hopes to attend Montana State University for a degree in electrical and mechanical engineering, was understandably excited about using the laser, although he still has several more months of work on his full graduation project. But based on the positive response he has gotten from the city, his future is looking pretty bright.

Danielle Taylor is the Senior Editor of Parks & Recreation Magazine.