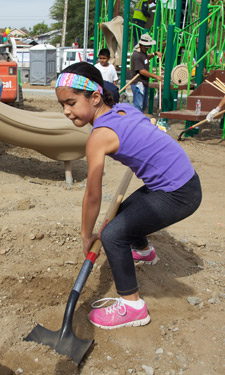 For a community with a name that literally translates to “the serene one,” the East Los Angeles neighborhood of El Sereno has historically lacked places to find such serenity. Despite the fact that El Sereno has among the county’s highest percentage of residents aged 10 or younger, few community facilities exist to provide opportunities for play, exercise, or just relaxation. Fortunately, thanks to a far-sighted mayor along with overwhelming support from several NRPA partners, individual donors, city officials, and community activists, a new park is well underway that is eagerly anticipated to provide a much needed peaceful oasis in the middle of the busy community.

Construction for the park, which has yet to receive an official name, broke ground on July 26, and it’s slated to include a number of exciting components. PlayCore, a national playground manufacturer, has donated a 4,000-square-foot, state-of-the-art playground with elements for adults as well as children of all ages and ability levels, and a grant from First 5 L.A., a California state program that provides funds for early childhood development programs, paid for a nature play garden specially designed for younger children. The site will also include walking trails, traditional wooden play elements, picnic tables, and sustainable design concepts to minimize its environmental impact and reduce the need for regular maintenance. For this community that has been advocating for a neighborhood park for half a century, the anticipated green space couldn’t be more welcome.

Decades in the Making

About 50 years ago, the California Department of Transportation (known as Caltrans) bought a property in El Sereno with plans to extend the I-710 freeway through the neighborhood from the south. But those plans never materialized, and about 30 years ago, community members began envisioning a vibrant community park on the long-neglected lot. However, the land was still owned by the state and controlled by Caltrans, and despite plenty of community effort, the neighborhood could never secure the proper approvals and funding for a park.

In recent years, though, renewed interest in the project from some influential individuals with the support of the community has brought the idea from a dream to a reality. Through the combined efforts over the past six years of José Huizar, Los Angeles City Councilmember for District 14, and community members including Val Marquez, founder of the neighborhood advocacy group Concerned Neighbors of El Sereno, the community was finally able to secure a 25-year lease from Caltrans for the property. In January 2010, Councilmember Huizar contacted The Trust for Public Land (TPL), a national land conservation organization, and Program Manager Tori Kjer has since led TPL’s efforts toward gathering funding for the project and soliciting community input for the park’s design. When NRPA asked the Los Angeles Department of Recreation and Parks if they would like to cooperate on a Parks Build Community project, El Sereno was their first choice.

“The community has been advocating for a park to be there since way before we got involved,” Kjer says. “We agreed to facilitate community outreach efforts to pull together a design (to propose with grant requests for funding). We facilitated a number of meetings over about six months and got a really great turnout. People are really excited about it, and we came up with a design based on that [community input].”

In a true effort to accommodate the requests of those who will be using the park the most, community leaders have turned to neighborhood children for design ideas. “Twelve-year-old kids are telling me, ‘We don’t want any gangs, we would like to have more shade,’” Marquez says. “These kids are watching this every day, seeing the progress, and they’re always asking, ‘When is it going to be open, when can we go in and play?’”

Initial grant requests were hampered by bureaucratic red tape, but the park really started to take off last November when TPL, in partnership with the Los Angeles Neighborhood Initiative, secured a substantial grant from First 5 L.A. About the same time, representatives from the Department of Recreation and Parks for the City of Los Angeles came out to assess the site and decided it would be a perfect fit for L.A. Mayor Antonio Villaraigosa’s 50 Parks Initiative, which aims to bring 50 new parks to the city, particularly in areas that are relatively park poor. The mayor has a vested interest in this park, as he grew up in an adjacent neighborhood a few short miles from the park site.

“As a son of Boyle Heights, I’ve served as an assembly member, councilmember, and now mayor for this community,” Villaraigosa says. “I know what it’s like to grow up in a park-poor neighborhood, and I know what a difference a park can make. I hope the 50 Parks Initiative will change this area, and other people-rich, park-poor areas, for the better."

NRPA pioneered the Parks Build Community initiative beginning in 2008 and has completed two significant park restoration projects with partners since then: Marvin Gaye Park in Washington, D.C., and Selena Butler Park in Atlanta. When El Sereno was selected for the 2012 Parks Build Community project, NRPA brought significant input, resources, and donations from a number of partners, including PlayCore, which agreed to donate a specially designed playground system, installed in September as part of a community build day. The playground includes a number of different components, including a large school-age composite play structure; an accessible, safety-engineered Merry Go All whirl; and a preschool play area. The system also features an adult fitness zone, which was provided at a discount by PlayCore and paid for by a grant secured by TPL. PlayCore has also contributed to NRPA’s previous two Parks Build Community projects and provided a comparable donation to the El Sereno project.

“[Parks Build Community] is an annual opportunity with NRPA,” says Tom Norquist, PlayCore’s senior vice president of product development, design, and marketing. “We’re committed to the communities we work in and play in—we want to participate and give something back. I think [the El Sereno park] is going to be very well taken care of. It’s theirs. The community owns this park, the community owns the design, the community owns what we’re doing there.”

Other donors include philanthropist Aileen Getty, the founder of GettLove, an L.A.-based nonprofit focusing on the needs of the homeless; Grifols, a biomedical corporation adjacent to the site, which donated funds for fencing; The Rosalinde and Arthur Gilbert Foundation, a California-based nonprofit that supports health and fitness initiatives; Kaiser Permanente; the Union Bank Foundation; and ValleyCrest Landscape Companies. EPT DESIGN, a local landscape architecture firm, and Breen Engineering, a multidisciplinary engineering firm, have donated the design for the park’s layout and infrastructure, and have waded through the city permit process on behalf of the park.

Because of the park’s innovative plans for its children’s play garden, that section of the site has been selected as a national demonstration site for the National Natural Play and Learning Project by the National Wildlife Federation and the Natural Learning Institute of North Carolina State University. Showcasing national guidelines for nature playscapes, the play garden will receive national publicity in all mentions of the project for the next two years.

All told, the park will cost more than $1 million to build, so the generous donations and contributions from the different partners involved in its development and construction have played a critical role in making this community dream a reality.

The park will operate under the supervision of the Department of Recreation and Parks (RAP) of the City of Los Angeles, and from the beginning, the department has been heavily invested in the park’s success. Jon Kirk Mukri, general manager for L.A. RAP, looks at the park as a place where children can explore their potential and develop necessary life skills that they may not otherwise have a chance to cultivate without the resource of a park.

“We know the benefits of playgrounds,” Mukri says. “We all know that we learn our problem resolution skills in the sandbox. That is a truism; as kids, we learn to play in the sandbox, literally and figuratively, and if you don’t have a sandbox to play in, you’re not getting those social skills at the very time when lives can be influenced and changed.”

Dana Valdez, community program director for L.A. RAP, has spent countless hours working with the to coordinate the efforts of all of the different partners involved in the project and make sure RAP is providing any necessary assistance to the planning and construction of the site.

“It’s been great working with NRPA, TPL, PlayCore, and all the partners,” Valdez says. “Having all these entities all work together, it’s awesome to see we’re all doing this for the purpose of providing open space and environmental nature programs for these kids and young people.”

The last elements of the park are expected to be in place late this fall, and the community is tentatively planning to hold a ribbon-cutting dedication ceremony in early December. Even before construction is complete, however, the park is already having a significant effect on the lives of local residents. Val Marquez spoke with one neighborhood woman who gushed about how the coming park is set to make a major impact on both her home and her business.

“She runs a daycare center two blocks away,” Marquez says, “and she came to the site to talk to me with about five kids in strollers and two other adults helping her. She told me, ‘We were going to move on to another community because my yard is not big enough for these kids…but now that this park is going to be open, I’m staying. I’m going to be here just about every day, and I’m bringing all my kids.’ It was just beautiful to hear that.”

Attend the celebration ceremony for the El Sereno park!

As part of NRPA’s annual Congress & Exposition, the City of Los Angeles will host a ceremony commemorating the progress and success of the new park in El Sereno. Mayor Antonio Villaraigosa will speak at the commemoration event about the park’s significance to both the 50 Parks Initiative and the community of El Sereno, and attendees will be invited to personally pitch in on the park’s construction. Interested in attending? A shuttle will take Congress attendees from the Anaheim Convention Center to the park site, although spaces are limited. If you would like to join, please RSVP by contacting Sydney Singer at 818.756.9955. Meet at the Transit Plaza in the convention center’s south main lobby by 11:45 a.m. The bus will leave at 12 noon for the 2 p.m. ceremony and will return to the convention center by 5 p.m. Refreshments will be served on site.

NRPA, The Trust for Public Land, and the Los Angeles Department of Recreation and Parks gratefully acknowledge the following individuals and organizations for their generous donations to the El Sereno park project:

The Rosalinde and Arthur Gilbert Foundation