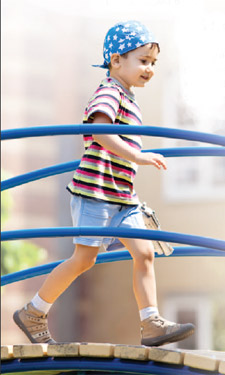 1 in 5: Children in the U.S. who live within walking distance of a park or playground (Centers for Disease Control).

29: Percentage of increased incidence of childhood obesity in neighborhoods without a park or playground.

5x: Likelihood of a child being a healthy weight if there is a park or playground within a half mile, compared to children without a nearby playspace (Singh).

60: Minutes of daily physical activity recommended by the U.S. Department of Health and Human Services for young people aged 6-17.

29: Percentage of U.S. high-school students who engaged in 60 or more minutes of physical activity on all seven days prior to being surveyed (according to a 2011 CDC study).

7.5: Hours a day the average child aged 8 to 18 spends on entertainment media. Due to media multitasking and using multiple forms of media simultaneously, children actually pack in nearly 11 hours of media use daily (Kaiser Family Foundation).

15: Minutes of recess time needed to cause children to behave better in class and learn more, according to a study of 11,000 third graders (Barros, Silver, and Stein).

70: Percent of children who played outside daily one generation ago (Clements).