When I began my research for the feature article on collaboratively built mountain biking trails  for the June issue of Parks & Recreation Magazine, I started out by watching “Pedal-Driven,” a 2011 documentary that looks at both sides of the debate surrounding illegal mountain bike trail building in the Okanogan-Wenatchee National Forests near Leavenworth, Washington. There, the U.S. Forest Service manages more than 4 million acres along the eastern slopes of the Cascade Range, and in recent years, the land has been inundated with problems due to illegal trail building by mountain bikers in the area.

It’s a dilemma that public land managers see every day, and it gets to the heart of the preservation vs. conservation debate. Is it better to preserve publicly-owned lands for the future and make them inaccessible to humans who might harm them, or should we open them up to the public, accept the reality of human impacts on the landscape but nurture the next generation of environmental stewards? Also, what should be the role of government in the protection of publicly-owned lands, and what right does the government have to ban citizens from enjoying lands that they collectively own?

“Pedal-Driven” starts out by asking, “Who owns the forests?,” and it’s a question that needs to be asked of all public lands. Philosophy and ethics surrounding these issues drive the decisionmaking behind the management of public lands nationwide, but reality needs to be factored into the equation as well, as even the best of intentions don’t always work.

When forest rangers at the Okanogan-Wenatchee National Forests prohibited mountain biking in an effort to protect the landscape, the effect was an unorganized network of unsanctioned trails that damaged the landscape much more than a well-planned, sustainable system of trails would have been.

The problem isn’t unique to federal lands, and I knew of one regional park in my area (Fountainhead Regional Park Mountain Bike Trail) where mountain biking had been prohibited, but thanks to a collaborative partnership with the local mountain biking community, the park authority has created a highly popular, well-built recreational resource.

Knowing there had to be similar examples out there, I put out calls for information on NRPA Connect and Twitter as well as through email. Within a few days, I had gotten leads on more than 50 relevant trail systems nationwide. I thought I would get a lot of messages from frustrated park employees tired of dealing with rogue mountain bikers, but the overwhelming message I got was positive. Even in places where illegal trail building had been a problem, I was pleasantly surprised to learn how many parks and agencies had developed good relationships with their local mountain biking communities. 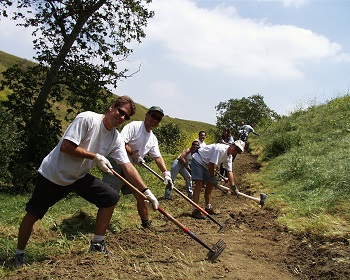 Some of these trails and bike parks really are mind-blowing, and I would have loved to fit more of these great collaborative partnerships into the article. Take a look at the following examples, to name just a few:

As mountain biking became really popular over the last decade or so, many public land managers were concerned that the sport would offer a new opportunity for recreation that would come at the cost of the environment, but based on the feedback I got from park professionals who responded to my initial query for this article, it seems that this isn’t the case in the vast majority of places. Quite the opposite, actually.

So, who owns the forests? We all do, and by working together for the long-term good, we can offer energizing, sustainable recreation that encourages the next generation of land stewards to protect our natural heritage.

What are your experiences working collaboratively with mountain biking groups in your area?  Share in the comments below or tweet us @NRPA_News.