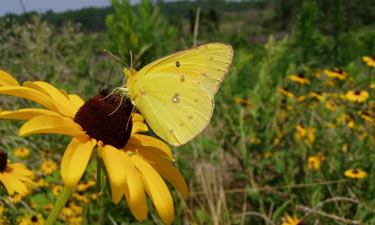 Many of us view conservation as the collection of recycling and energy saving habits that good citizens of the planet try to practice in their daily lives. Carpooling. Reminding a guest to toss that Coke can in the recycling compartment. Flipping off a light switch when you leave a room.

For others, conservation is an all-encompassing worldview. They look at the natural world and see a richness and an unfolding narrative that most of us have not been trained to see. For those folks, a short hike through a valley is a biodiversity adventure. A tree planted in between blocks of cement is the launch of a stormwater collection mission deep into the ground.

And then there is the language of conservation. Conservationists use terms like “invasive species” (which, unlike boring “weeds,” contain action-packed tales of clashing natural cultures).

Conservationists, because they have learned to see the world as a rich and animated place, are also quick to perceive the worth of cultural artifacts. To value intersections of nature with human experience. Nevada's ancient Native American rock art, for example, belongs to the fuller landscape—and merits protection and preservation as much as the landscape itself.

When my colleague Beth Beard and I dived into research for the April cover story, “Natural Leaders,” I expected to hear about a lot of best practices and finer points of water re-use, master planning, and land acquisition. And I did hear about those things. But what I learned was that, when you are talking with a true, dyed-in-the-wool conservationist, you always hear the story behind the practice first.

Species inventorying in North Carolina, for example.  It all began with the discovery of an endangered sunflower native to the Charlotte area.  Fields of vivid yellow wildflowers captured the imaginations both park leaders and the public—and staff scientists then led the effort to study and protect hundreds of other species native to the county.

And in Baton Rouge, Louisiana, invasive species management in forested areas became a youth camp exercise in “battling the invaders,”—complete with war paint and “weapons.”

In New York City, each tree planted drives toward the thrilling goal of achieving a million-tree-strong urban forest.

In Columbus, Ohio,  prairie habitat restoration means the return of bison to a land they had vanished from more than 200 years ago.

The practice of conservation happens in a thousand different ways. But true leadership in that area, I learned, occurs when the vivid “conservation imagination” intersects with opportunities  to educate and engage the public.

And park leaders can do that like no one else.