Nationally, 2015 was a turbulent year to say the least. Looking back at the headlines, we see terror attacks, mass shootings, plane crashes and more. Despite the tragedies, parks and recreation continued to serve their communities to the fullest—providing them safe places to get healthy, enjoy nature and come together.

Among the national headlines, parks and recreation had their own. From dealing with emerging technologies to expiring legislation, here are the top stories from our field in 2015.

In 2015, NRPA celebrated its 50th anniversary and all of the accomplishments we have made together as a field. We looked at where we’ve been and where we’re going.

We also saw major legislation like the Land and Water Conservation Fund expire and then get reauthorized in the Congressional spending package.

In Parks & Recreation magazine, articles about emerging technology dominated in popularity. The top five articles this year were:

In the news, park and recreation pros showed the most interest in these headlines from the year:

On social media, posts about health and parks, our 50th anniversary, and the power of parks had the most social power.

On Open Space, your top reads included stories about monarchs and throwing it back to the 80s.

And last, but not least, the members of NRPA collectively had a successful year. More of you became certified, did great work through grants and partnerships, and shared best practices via NRPA Connect. Here’s what 2015 looked like for NRPA. 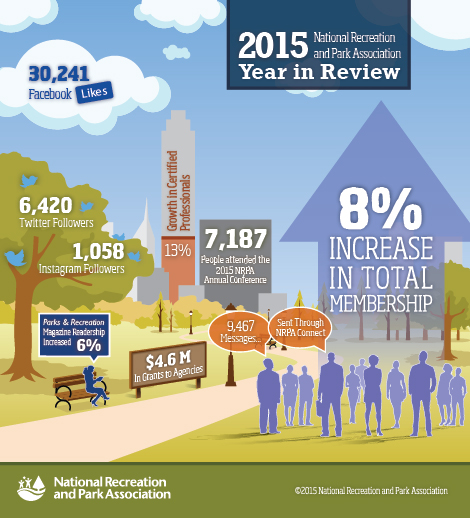 As we say goodbye to 2015, we thank you for the amazing things accomplished this year and look forward to an even brighter 2016. Happy New Year!

What are you looking forward to accomplishing in 2016?