If you were wondering about the status of the highly threatened monarch butterfly this past winter, the news is not good. The over-wintering population of monarch butterflies in Mexico suffered a significant setback, and winter numbers are estimated to be down 27 percent from 2016. Observers speculate that this was due to late winter storms last spring, and somewhat harsh conditions this past winter. The World Wildlife Fund and Mexico’s Commission on Protected Areas announced the troubling news in February, 2017, citing the loss of 133 hectares of deforestation from storms and illegal logging in the oyamel fir forests in Southern Mexico.

No matter how battered the wintering monarchs are, they are now on the move northward in one of the most spectacular sustained migrations that any animal, insect or bird species on the planet makes. The complex, multi-generational migration of the monarchs is one of the great mysteries of nature and we have a front-row seat in much of the United States to observe it and help contribute to its conservation.

You can see the current map and list your sightings here. Check back frequently to track the northward monarch migration, and then, as summer changes to fall, follow the southward migration on monarchs back to Mexico.

Rusty patched bumblebees have declined nearly 90 percent in the last 20 years, making this a truly imperiled species. Entomologists and ecologists have noted the decline of many types of wild pollinators in the U.S., some of which are very valuable to our nation’s agricultural output. The Xerces Society’s Red List of Bees provides a summary of native bee species that are in decline. Species on the Red List range from vulnerable to imperiled to possibly extinct. The listing of the rusty patched bumblebee is the first time that a bee in the continental U.S. has been listed as an endangered species.

It is unclear what impact the listing of the rusty patched bumblebee will have in the very few remaining habitat areas for the bee. A number of industries have strenuously objected to this listing including agriculture, timber, home-building and energy industries. Being listed as an endangered species brings federal protections that prevent anyone from knowingly harming or killing the bees.

The U.S. Fish and Wildlife Service is now tasked with producing a recovery plan for the species which will identify critical habitat for the species and other actions intended to aid in its recovery. The costs of such recovery were not previously calculated, but they will be now. The impact of Presidential Executive Orders on reducing regulations, reducing the costs of regulations, and other Executive Branch actions intended to reduce the impact of environmental regulations remains to be seen. For now, the fast-disappearing rusty patched bumblebee has a lifeline.

If you are a subscriber to Parks & Recreation magazine, look for the April 2017 Conservation Issue for an eye-catching poster to hang on the wall of your nature center or community center. 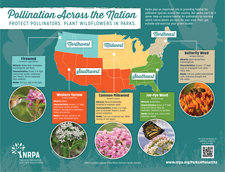