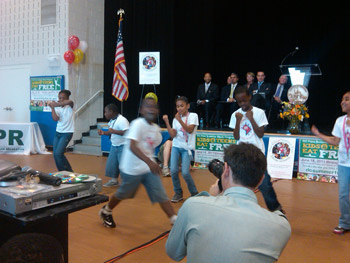 When District of Columbia school officials make their crack-of-dawn decisions about closing school on a snowy winter day, they must consider whether conditions are bad enough to warrant citywide hunger. For many children across our nation’s capital, one day of closed schools means one day without adequate nutrition. One day of kids feeling hunger pangs and trying to quiet those pangs with whatever food might be available. One day of depleted brains and bodies. One day when learning and thriving are just a little more challenging once school does resume.

If one snow day has such serious consequences for children in the District, then what must 50 in a row be like? And not just 50 days in one place, but many. Across the country this adds up to about 15 million. In fact, that’s the number of children receiving free and reduced-price school lunches but who lack access to such meals with the arrival of summer. Fifteen million—not just toughing it out for one, long, difficult, stomach-rumbling day—but 50?

Parks and recreation people are no strangers to child hunger. For decades, parks and rec agencies have been the single biggest provider of summertime free meals to children in low-income areas in the United States. Few people are aware of the staggering social services that local rec centers and community centers provide in feeding the neediest of children during their summer vacations. I certainly didn’t know this until I came to work for NRPA last year.

Yesterday, I attended an event that showcased the work that parks and rec folks do quietly, behind the scenes, for the children in their communities. At the Columbia Heights Recreation Center in D.C.,Walmart kicked off its summer giving campaign—an initiative that will, through various grants to partnering organizations, direct $25 million to expanding summer services for kids. NRPA is just one of those 350 partners, and the $2.1 million NRPA grant will, for the second year in a row, go directly to parks and rec feeding programs in 30 cities around the country. As a result, 2.5 million nutritious meals will be served to low-income children this year. It is, perhaps, the most sweeping national private philanthropic effort ever to tackle child hunger in this country.

And it comes at a time when park agencies, with slashed budgets and reduced staffs, most need the private assistance if they are to continue feeding the children who live in their communities and play in their parks.

Speakers at yesterday’s event—including D.C.’s mayor Vincent Gray, NRPA CEO Barbara Tulipane, and representatives from hunger and child advocacy nonprofits—emphasized the ties between child nutrition and overall healthy physical and mental development. One speaker after another thanked Walmart and its foundation for their efforts.

In between speakers, some of the children who will be benefitting from this summer’s Walmart grants performed in a dance, shouting the refrain of “Exercise! Exercise!” All eyes were on the children—their energy, their smiles, their grace, their clear enjoyment of the crowd, and their own carefully rehearsed dance moves. And later, when the kids sat down at tables with tablecloths and flowers to eat their boxed meals, their good appetites were equally evident.

Yesterday’s kickoff event offered a fitting reminder that childhood hunger is no abstraction but rather a threat to the most vulnerable and promising members of our communities. A threat that must be fought daily. Parks and recreation people are already fighting child hunger. And now corporations like Walmart are coming to their assistance. This can only be good news for the 15 million children and youth who’ve learned to dread the hunger that comes with summertime.