Pictured: 2022 will see the opening of Youngs Creek Park, with a playground, splash pad, pickleball courts, trails and amphitheater with grounds to hold 5,000 people. Photo courtesy of City of Franklin.

June 7, 2008, started out as just a rainy Saturday morning in Franklin, Indiana. By the end of the day, the city was changed in devastating ways. With more than 10 inches of rain pouring down, the downtown core was flooded, businesses and buildings ruined, and lives completely uprooted. This historic flood began the plans that would ultimately become Youngs Creek Park.

One of the first questions asked is, “why us?” Why this flood and why didn’t the water go down? The answer is growth. The city was the unfortunate recipient of the unintended consequences of growth to our north. Indianapolis and areas to the west began to grow quickly and farm ground that normally helped absorb water, was now new buildings and parking lots.

While mitigation efforts were always considered and made wherever possible, the reality was there was now more water flowing from the White River and Indianapolis into Youngs Creek than ever before. As a result, the city flooded that day, as the water was coming down faster than it could drain off. The downtown had a limited area of water retention to give space for the water until it could naturally flow further south, which further exacerbated a mounting problem.

The city has historically dealt with flooding in its downtown, but this flood was the final straw. While two businesses continued to stay, the county annex building came down, leaving a hole in our core. After eight years and two more minor floods, the final two businesses chose to leave. 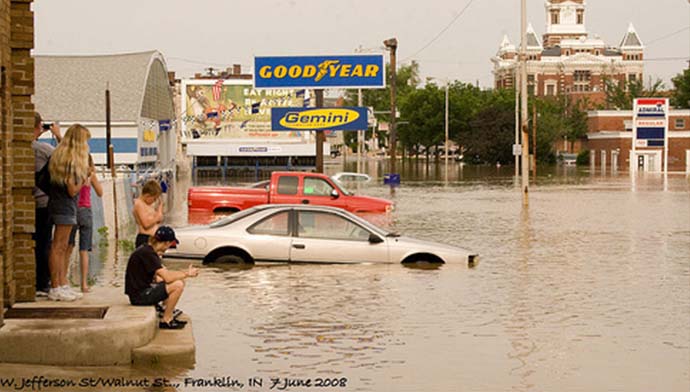 These businesses had been in the community for more than 20 years and were valuable partners. The city assisted with finding a new location for them and began the process of tearing down the buildings and designing a park and amphitheater in their place. This process involved working with our downtown businesses on the vision for the future and best use of the area.

This unique time also saw an opportunity to reconstruct Jefferson Street, the main artery through our city. Public meetings were held throughout this entire process, letting members of the community see the plans for the downtown infrastructure, as well as the concept of a new park. The idea for the amphitheater, playground and open space soon became incorporated into the vision for Franklin.

This was also a great opportunity to finally create the setting that would give water a place to go when the creek became overwhelmed, while also giving us ideas on how to clean up the banks and remove obstructions that were contributing to the water flowing more slowly. Design ideas were finalized, and in 2020, construction began.

Part of the plans for this park included the creation of a splash pad. The city has a dynamic aquatic center located on our south side, but there was no park or water feature for our downtown residents and visitors. Visioning meetings held through the community development department brought the idea of a park with amenities that were not otherwise close to our downtown neighborhoods. Initially, the idea for a spray park location was more on the east side, but after hearing from families who live in the near-downtown area, the location was changed.

Through generous partnerships and the Building Better Communities grant from the American Water Charitable Foundation and NRPA, the splash pad design was completed and added to the overall park feature. This feature has conservation-focused elements, including a recirculation system that allows water to be reused in the splash pad, as well as utilized in watering the grounds. It was also built to withstand future flooding.

The splash pad provides an opportunity for the community to learn about the environmental benefits of the project by providing educational signage to showcase the water process and how people can act as water stewards. In addition, the Indiana American Water tower, which is located at the site, will have signage showing the benefits of responsible use of water, and how to conserve water at home. This amenity is built to withstand the floods that may come, while providing the perfect enjoyment for children all summer long.

2022 will see the opening of this amazing inclusive park, with a playground, splash pad, pickleball courts, trails and amphitheater with grounds to hold 5,000 people. These amenities, such as the pickleball courts, splash pad and shelter areas were the direct result of residents providing input and giving us their “wish list.” This once devastated and blighted area will become the center of activity for social connections with residents and visitors alike. The story of water will be showcased as the creek runs through the area that can now handle the flooding without destroying the downtown. The beauty of water and recreation will be enhanced through the amenities now here. And above all, the city has risen above tragedy to become a stronger, better community.

Dana Monson (her/hers) is the community development specialist for the City of Franklin.