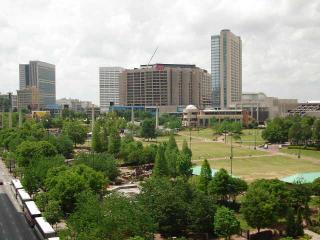 $250: The average price per square foot of condominiums adjacent to Centennial Olympic Park in Atlanta shortly after the park was completed.

$115: The average price per square foot of those condominiums just before Olympic Park was built.

1,000: The percentage rate of return the Commonwealth of Virginia enjoyed in 2010 ($189 million) on its $16.5 million state parks appropriation.

Just a few facts from the August issue of Parks & Recreation. They speak for themselves, and many of our readers (being well versed in all things park-related) probably found them unsurprising. After all, the real estate before-and-after is pretty typical of the kinds of boosts great parks give to surrounding real estate values. And distinctive state parks are perennial tourist magnets. But, while the nation’s realtors, chambers of commerce, and park devotees (among others) recognize that parks are economic drivers, much of the rest of the country continues to regard parks as sheer expense. A nice luxury, but one that is best reserved for times when public coffers are full.

“Our budget has been cut the last three years pretty substantially,” Mike Alsup, director of the Parks and Recreation Department, said. “So far, we’ve been able to absorb the cuts, and the public hasn’t noticed so much. They have some this year. We’ve had a few complaints this year. If some of this goes through, people will definitely see a difference. We’ve trimmed all we can from accounts. Now, we’re talking about staff.”

And from Port Townsend, Washington:

“We had our busiest July ever,” park manager Kate Burke told a chamber luncheon at the Port Townsend Elks Lodge…. [Vehicle] pass sales are expected to generate $57 million a year, according to Burke — but even if those projections are met cutbacks will be required.”

The list goes on an on. In the name of recession-era austerity, cut follows cut. And, in the name of keeping parks running, park managers continue to figure out ingenious ways to absorb those cuts. All the while, budget “savings” are trumpeted by localities or states—and the considerable opportunity costs of depleted agencies and postponed park projects are all but ignored.

Perhaps a change in the public funding of parks begins with a shift in terminology. I learned a long time ago in Economics 101 that funds fueling a time-tested wealth generator are not properly referred to as “cost.” Nor is it quite accurate to call the appropriation of those funds “spending.” The correct term is, I believe, “investment.” And while the availability of investment capital will always fluctuate from one economic season to the next, bad times only multiply the reasons to invest in the assets that yield a whopping return. Assets like parks.