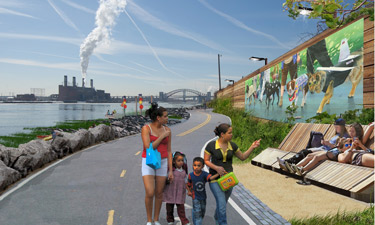 South Bronx: for some, the name alone may conjure up images of a gritty, concrete- and asphalt-encased urban landscape, riddled with dilapidated housing and abandoned, rusting industrial buildings and a sense that it’s a dangerous place to be passed through en route to somewhere else. Two of New York’s poorest neighborhoods — Mott Haven and Port Morris — can be found here, nestled between train tracks, major expressways and the East River. Gantries, which once transferred goods from East River shipping vessels onto railroad cars, now rise like rusted-out sentries along the waterfront that once was home to a thriving commercial and residential district of stone and iron works, and furniture and piano factories. Prior to World War I, the South Bronx was known as “The Piano Capital of the United States;” more recently, it’s credited with being the birthplace of the music and culture known as Hip Hop.

Recently, South Bronx made its way into the national spotlight, and not in a good way. There’s been an outbreak of Legionnaires’ disease, an airborne infection that has killed 12 people and infected at least 113 since early July 2015. City health officials, along with investigators with the New York State Health Department and the Centers for Disease Control and Prevention, are working to determine the source of the outbreak. In the meantime, city officials have called for every building with a cooling tower to be inspected and disinfected.

Roughly 45 percent of the more than 53,000 residents who call South Bronx home live below the poverty level, a condition that manifests itself in a number of health challenges. In a recent op-ed piece in Crain’s New York Business, Deborah Marton, executive director of the New York Restoration Project (NYRP), a nonprofit whose goal is to provide quality public space within walking distance of all New York City homes, states: “South Bronx residents suffer from some of the poorest health outcomes in the U.S. Asthma rates are 50 percent higher than the city’s average. Seven out of 10 residents are overweight or obese. It’s a leader in diabetes-related deaths.”

There is an abundance of research demonstrating that your surroundings impact your health. The fact that living near parks and having access to green, open spaces can enhance the quality of one’s life is so intuitive that, often, we may not see the need for studies showing cause and effect. But, according to Marton, such research could be incredibly helpful. To that end, NYRP recently unveiled The Haven Project, designed to monitor, measure and analyze how, over the course of several years, the redesign of the Mott Haven and Port Morris neighborhoods will impact residents’ health.

In her Crain’s New York Business op-ed, Marton describes the project as follows: “In the poorest congressional district in the country, we’ve launched The Haven Project, a pioneering plan for comprehensive community development that will turn desolate, trash-filled lots and pathways into a network of vibrant green spaces, complete with tree-lined streets, public art, bike lanes and a completely reimagined waterfront — all with the goal of creating and supporting a better, healthier South Bronx.” The project is a highly collaborative effort that includes input from more than 100 Mott Haven and Port Morris residents, 16 local businesses, 31 community-based organizations, 14 city and state agencies, including the NYC Department of Parks and Recreation and the NY State Office of Parks, Recreation and Historic Preservation, and the offices of six elected officials. The master plan proposes the development of a new waterfront park; improved access and wayfinding for pedestrians and waterfront users; development of green infrastructure and plantings; increased community engagement; and other initiatives.

“The open spaces,” Marton explains, “are being planned specifically to achieve health gains, which will be measured by partners from Montefiore Medical Center, Columbia University and others…Never before has a multiyear capital project of this scale included research and monitoring to demonstrate the connection between open space and quality of life.” Rupal Sanghvi, founder of HealthxDesign, says, “We’ll be looking at medical records, diabetes rates, community health surveys and multiple data sources over at least the next five to seven years.”

Among those extolling the value of this project are NYC Department of Parks and Recreation Commissioner Mitchell Silver, who says, “NYRP’s advocacy for an open space network is important for creating safe pedestrian and bicycle access to the Connector and improving neighborhood walkability in Port Morris and Mott Haven. NYC Parks looks forward to continuing its efforts with NYRP, NYCDOT, RIPA [Randall’s Island Park Alliance], and the community to improve open space access for enhanced neighborhood health.”

Why the South Bronx?

Marton credits the July 1995 heat wave in Chicago that killed 750 people as being part of the inspiration for The Haven Project. In his book titled, “Heat Wave: A Social Autopsy of Disaster in Chicago,” public sociologist and professor Eric Klinenberg looked at two adjacent, almost identical low-income Chicago neighborhoods following this horrific event. What he found was that the death rate in one neighborhood, Englewood, was almost 10 times higher than the other, Auburn Gresham. In determining the reason for this occurrence, it appears that in Auburn, a tight-knit community with walkable streets and intact housing and parks, neighbors checked on each other; whereas, in Englewood, which lacked these elements, people did not check on each other. The lesson Marton finds in this study is that neighborhoods matter and that’s what NYRP is out to prove in the South Bronx.

In Mott Haven and Port Morris exists a unique combination of challenges — limited, under-resourced parks and open spaces, lack of waterfront access, monumental highway and industrial infrastructure, a vulnerable local population and poor environmental health outcomes — and opportunities — a strong coalition of community-based organizations, activists and concerned citizens, a vibrant cultural history, ongoing investment in capital projects and programs, coastal resilience and a strong hospital network — that enable a measurable approach to the cause and effect research Marton says would be helpful.

So, how will NYRP and its partners gauge success? Marton says, “When we prove the Bronx is truly back, we’ll have the health, safety and social metrics to show it and a paradigm for achieving similar results in other underserved communities.”

Sonia Myrick is the Managing Editor of Parks & Recreation magazine.