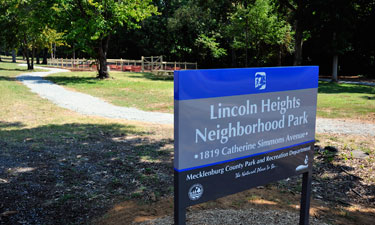 People working in the field of parks and recreation know the transformative power that a park can have on a community, but often, residents who benefit from these public resources don’t see the bigger picture. That’s not the case in the Lincoln Heights neighborhood in Charlotte, North Carolina, where locals have been clamoring for a park for years. When the first phase of Lincoln Heights Neighborhood Park was built in 2011, community leaders knew it was just the beginning. Now, NRPA and the Mecklenburg County Park and Recreation Department have partnered with Playworld Systems, Greenfields Outdoor Fitness, Poligon by Porter Corp. and Cornilleau USA to bring a new wave of recreation options to this economically disadvantaged community. The redesigned park will open to the public October 16 in an event coinciding with the 2014 NRPA Congress in Charlotte.

Originally opened in 2011 as a 9/11 memorial project, the nine-acre linear park currently features a playground, community garden, gravel walking trail, bike rack, water fountain  and several picnic tables. It’s a definite boon to the neighborhood, which had previously been identified as a play desert, but much of the current landscape is underutilized, and access is limited along the park’s long southern edge. Park planners knew that for this park to have maximum impact in its community, it would need to offer more to attract residents. In October 2013, NRPA and the Mecklenburg County Park and Recreation Department identified Lincoln Heights Neighborhood Park as the ideal site for the 2014 Parks Build Community initiative, and together they began searching for partners, gathering feedback from community leaders and developing a plan for the redesign.

“Lincoln Heights was chosen because of the great neighbors who live there and their desire for years for a park,” says Jim Garges, director of Mecklenburg County Parks and Recreation. “They understood the value of the park for their children and as a place of pride to gather and see their neighbors.”

“A park is an important asset for any neighborhood,” says Thelma Byers-Bailey, former president of the Lincoln Heights Neighborhood Association. “We were really excited about the first level of development, but we always had in mind that this was not the finished product. We’re very excited our children will have a safe place to play.”

The new plan for the park, made possible through donations from project partners and input from community members, includes an exciting mix of amenities to serve the neighborhood’s needs. Children’s play equipment will include a Unity Climber dome, a Rushmore hill feature, a NEOS 360 game structure and a Cruise Line flyer courtesy of Playworld Systems, plus a set of swing bays purchased by the Mecklenburg County Park and Recreation Department. The park will also include five fitness stations donated by Greenfields Outdoor Fitness, covered by a shade structure and adjacent to the newly paved half-mile walking trail. Shelters donated by Poligon, an outdoor ping-pong table courtesy of Cornilleau USA, a basketball half-court with a water fountain, a revitalized open play field and an improved community garden will make Lincoln Heights Neighborhood Park an even greater asset to the community.

“Our experience tells us that where there’s a playground, there’s a community that gathers around,” says Kevin Cook, director of sales for Playworld Systems. “A playground becomes a central place, a gathering point for community. We anticipate that change to happen here.”

In addition to the new amenities, construction on the park will include a paved access point on the park’s long southern edge, which will open it up to neighbors on that side who currently have to walk around the entire park in order to access it. “[Once the additions are complete], we’re going to make a concerted effort to make sure the kids know there’s access and it’s there for them,” Byers-Bailey says.

After construction wraps up this fall, the park will begin to host regular programs onsite for neighborhood residents, including “Healthy Charlotte” events that encourage fitness in the parks through free exercise programs and educational materials on healthy eating. In addition, “Mecklenburg County is also hoping to bring a community-inspired public art piece to Lincoln Heights through collaboration with the McColl Center for Art + Innovation,” notes Jimmy O’Connor, NRPA’s senior manager of grants and partnerships, as well as the association’s lead organizer for Parks Build Community.

“The neighborhood is already absolutely great,” says Lee Jones, division director of Capital Planning Services for Mecklenburg County Parks and Recreation. “We hope these improvements will be an even further catalyst for fostering positive community identity and a stronger sense of neighborhood pride.”

Danielle Taylor is the Senior Editor of Parks & Recreation Magazine.