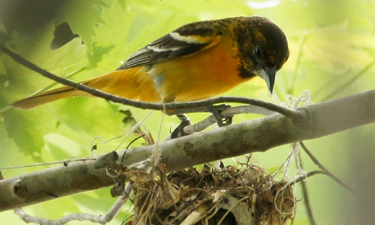 Once common in rural and urban areas alike, the Baltimore Oriole is a black and brilliant orange neotropical songbird that nests in a very wide habitat range throughout North America, all the way from the southern states up through Canada and west to beyond the Mississippi River. It winters south to Mexico and throughout Central America, thus the term neotropical.

As part of a class of songbirds with similar migratory and breeding behavior, this species, along with many others like it such as tanagers, warblers, thrushes and flycatchers, is in serious decline in the Americas due to loss of habitat and increased use of pesticides and herbicides.

The Baltimore Oriole is beloved to Maryland. Perhaps no other bird or animal symbolizes the state more. The bright yellow-orange breast and deep black head and back of the male perfectly matched the colors of Lord Baltimore, one of the founders of Maryland, and the colors of this official bird of Maryland are represented in the distinctive Maryland state flag. Once common in farms, orchards and even urban areas, the unusual hanging nest woven by the Baltimore Oriole was a welcome sight in the upper branches of sycamore and elm trees, and the bird’s preferred food source — noxious caterpillars, gypsy moths, cankerworms and bagworms — endears it to people even more.

The restoration of this iconic species throughout its historic range in the Baltimore region is one of the goals of the Community Wildlife Habitat program. Joan Cwi, president of the Baltimore Bird Club, a chapter of the Maryland Ornithological Society, says, “The Baltimore Oriole population is actually fairly stable and probably more prevalent in Baltimore City than one might expect.” She notes that they still can be found in a number of the historic city parks, but are difficult to find since they are high-canopy birds. She notes, “Local decline of the Baltimore Oriole is blamed in part on the loss of their favored large trees, especially elm (from Dutch Elm Disease) and sycamores. Alas, these types of trees are not being planted much because they are prone to disease and insect damage. Overall, increasing the canopy can help.”

For more information about the Baltimore Oriole, visit the Cornell Lab of Ornithology’s webpage.