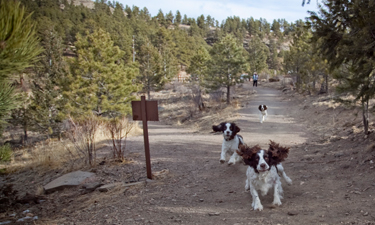 Unleashed adventure over 107 acres in the Rocky Mountain foothills for dogs and their two-legged companions. That’s the appeal of the Elk Meadow Park Dog Off-Leash Area in Evergreen, Colorado — an appeal that grew so strong that the dog park was in danger of being loved to death.

In the early 1990s, Jefferson County Open Space (JCOS) set aside a small, undeveloped training ground for dogs across the road from 1,657-acre Elk Meadow Park. As word spread of the one place in the JCOS system where dogs could be off leash, the park mushroomed in size and popularity. Two fenced areas were built, then a tangle of unsustainable paths developed, creating heavy erosion, hazards and confusion for visitors. Nearby landowners complained of trespassing, trash and conflicts between dogs. By 2011, it was time for fresh solutions.

“We wanted to build on what has made the dog park so popular with visitors while protecting natural resources and being sensitive to the concerns of our neighbors,” says Tom Hoby, who became director of Jefferson County Parks and Open Space in 2010.

Through site visits and an open house, JCOS staff gleaned park visitors’ insights and opinions. Trail and park management plans were developed to provide for safe and enjoyable experiences.

In a park inventory, five miles of informal, erosive paths with haphazard stream crossings were documented. To study user patterns, motion-sensitive wildlife cameras were installed along a path that closely paralleled private property lines and near the border of adjoining JCOS land with a wildlife conservation easement, where unleashed dogs are not allowed. The day after the path along the private property was closed, wildlife returned to the area.

Just up the hill from the closed path, JCOS built a 0.8-mile crusher fine trail to provide a gentle trail experience with astounding views of nearby 14,265-foot Mount Evans. The trail meets Americans with Disabilities Act standards with grades of five percent or less. Volunteers pitched in to groom the trail, which opened in 2011.

The bulk of the trail construction took place in 2012. Eleven stream crossings were winnowed to three safe, visually appealing crossings that meet stormwater regulations. The loop trail in the western section, popular with avid hikers, was realigned to extend no less than 300 feet from the conservation easement, reducing wildlife encounters. The JCOS Trail Stewardship Team, comprised of teenage summer employees, was vital to trail construction.

Trails crew members were empowered to innovate as the terrain dictated. A pair of staircases, 22 and 79 steps each, were built where grades reached 40 percent. The park construction crew built and installed log benches from beetle-kill pine throughout the park. Many informal paths remained open until the additional 2.4 miles of designated, sustainable trails were completed and signed. When the new trails opened, visitor compliance and satisfaction were very high; erosion and instances of trespassing, drastically reduced.

The community has been engaged all along the way. Visitors contributed suggestions for the names of new paths, which came to be known as Waggin’ Trail, Stagecoach Hollow Loop and Bone-anza. Today, the DOLA offers visitors 3.2 miles of sustainable trails, an upgraded six-acre fenced “Bark Park” and all the amenities a visitor could desire — all completed two years ahead of schedule.

“It’s a thing of beauty,” park visitor Erik Bakke says. “The two stair features are a piece of art. As frequenters to the park since the early ‘90s, we are thrilled to experience the park daily with our mutts.”