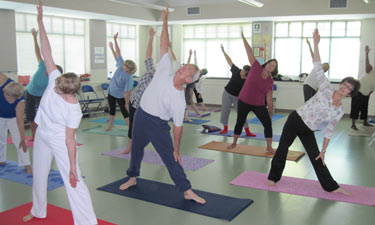 This is how Susan Hoskins, director of the Princeton (New Jersey) Senior Resources Center, summarizes her take on how the Baby Boomer generation is changing perceptions of aging. The prevailing attitude, she continues, goes something like this: “I’ve done a lot of the things I really wanted to do [rather than wait for retirement]—and I don’t have much money saved up for my retirement anyway. So, I’m just going to keep on working.”

While Hoskins is quick to point out that profiling an entire generation of people is problematic, the question she is is trying to answer is a critical one for communities. After all, every eight seconds, one of the nation’s 77 million Baby Boomers—those born between the years of 1946 and 1964—turns 60. And by 2030, people 65 and older will comprise 20 to 25 percent of the U.S. population.

As with every other chapter of life the post-World-War-II cohort has entered, their age-defying maturity challenges stereotypes. Boomers, we know, will transform how our society thinks about aging, retirement, health and fitness, lifelong learning, and volunteerism. What no one knows is how they will ultimately do that.

In the late 1990s, the first Boomers began entering their 50s, and this largest American generation now spans an age range from 48 to 66. In response to the aging Boomer demographic, park and recreation agencies and nonprofits are building (or adapting) lifestyle-enhancing facilities, designing holistic programming, and promoting dynamic forms of community engagement. Regardless of whether the big drawing card in a community is a café-like social center or citywide teaching and learning opportunities, the new senior center is being defined by a set of hard-to-ignore demographic themes.

The numbers bear out Susan Hoskins’s observations. According to the American Association of Retired Persons (AARP),only 11 percent of Boomers plan to stop working entirely once they reach 62. With older adults delaying retirement, localities can expect a change in the way residents engage in programs targeted to the 55-and-older age group. Hoskins and many of her peers around the country say their centers must extend their hours and offer assistance with career shifts, expanded skill sets, and professional “reinvention.”

As for finances, fewer than half of participants in a 2011 Wells Fargo/Gallup Investor Retirement Optimism Index survey said they were confident about their ability to achieve a comfortable retirement. And with good reason: One-quarter of Boomers have no savings or investments at all, and only 9 percent meet the definition of “affluence,” having pre-tax working incomes of $150,000 or more.

Don’t expect to find this rising older generation clustered together in adult community condos. Only 6 percent of Boomers plan to be living in a smaller residence five years from now. And most (76 percent) plan to live in either a same-sized or larger home. Of those who plan to remain in a home the same size, many say they hope to stay in the same residence. And despite traditional stereotypes of 50-something empty-nester couples, one-third of the Boomer generation are single (just over 25 million) and more than one-third (37 percent) have children under 18 in the household.

As older adults navigate singlehood, they are seeking places and programs supportive of single lifestyles, busy parenting schedules, and domestic partnerships (both gay and straight).

This is not a generation likely to sit by passively while aging overtakes them. The typical Boomer participates regularly in an average of 10 different physical activities. And 11 million of them regularly bicycle. Nineteen percent identify physical health as their top priority (above even relationships with friends/family and personal finances.) And, even though the National Institute on Aging (NIA) reports that 80 percent of Americans 60 and older have at least one chronic health condition, Boomers’ buying behaviors demonstrates their refusal to submit to the aging process.

During the next 10 years alone, according to National Institute on Aging statistics, the 77-million-strong cohort can be expected to increase their wellness spending from $200 billion to $1 trillion or more.

Seventy percent of Boomers AARP surveyed say they have a responsibility to make the world a better place. And this generation is volunteering at significantly higher rates than preceding generations did as they entered into their 50s.Yet, according to the Corporation for National and Community Service, three out of 10 Boomers who volunteer for an organization choose not to volunteer the following year. Retention rates, they found, are highest among those whose volunteer activities are professional and managerial, engaging in music or other types of performance, and teaching- or mentoring-related.

The Baby Boomers are approaching—and viewing—aging differently than their parents and grandparents did. Chronological age is just a number, work does not (indeed, cannot) end at 65, health is an asset to be actively managed—and opportunities to learn and make an impact are essential.

What will this largest generation in American history want and demand from their communities as it ages? From facilities, to programs, to chances to make a difference, interviewees reported, traditional assumptions no longer apply.