In this step, you define the array of benefits that can come from your project, through a green infrastructure (GI) benefits web tool.

Start creating your measurement plan based on NRPA’s GI measurement tables. Throughout the Framework, NRPA focuses on four benefit domains:

There are GI benefits not included in this Framework (e.g., reductions in energy use). NRPA focused on measures in the above community-focused categories, which are relatively easy to evaluate given resource constraints.

Step 1: Define Your Benefits and Measures

Before you decide how to collect GI evaluation data (Step 2) and analyze and report on that data (Step 3), Step 1 will help you understand the benefits your project may produce across the environmental, health, social and economic domains. After completing this step, you will know what to measure as you move forward in creating your evaluation plan.

This Framework focuses on 11 features of green infrastructure:

Because many health, social and economic benefits result from a community expanding its green space, the three Category 1 features have the greatest non-environmental impact since they revolve around green restoration and/or expansion. The features listed under Category 2 and Category 3 can produce some benefits in those domains, but results depend on the size, scope and location of those projects.

To find out more about any of the above features, including detailed descriptions and photographs, please see NRPA’s Resource Guide for Planning, Designing and Implementing Green Infrastructure in Parks.

Follow this step to decide how and when you should collect data on the benefits realized from your green infrastructure project. You then will be able to complete your measurement plan.

Learn how you can use data to strengthen your future green infrastructure work, and at the same time, trumpet your existing project’s achievements to build good will, awareness and even funding for your organization. 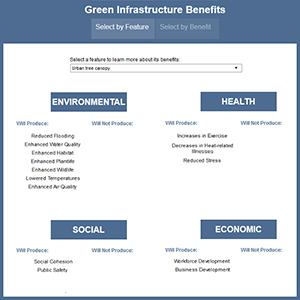