On May 13th, NRPA Board of Directors member Susan Trautman, CPRP, had the great honor of welcoming Vice President Joe Biden and Secretary of the Interior Sally Jewell to St. Louis, Missouri. It was an exciting day to hear such honored guests laud the important work of practicing conservation, promoting recreation and building parks!

Trautman, the Executive Director of Great Rivers Greenway, led the Vice President and Secretary—along with other elected officials—on a tour of the $380 million CityArchRiver 2015 Project. When complete, CityArchRiver will create easier and safer access to the Gateway Arch grounds and reconnect downtown St. Louis to a lively, reinvigorated riverfront. It will also add park acreage, bike trails, children’s play areas and performance venues while expanding museum and public education space at the National Park Service’s Jefferson National Expansion Memorial (the official name of the Gateway Arch).

Immediately following the tour, Vice President Biden, Secretary Jewell and St. Louis Mayor Francis G. Slay spoke to an audience of project partners, staff and the press about the power of infrastructure investment to drive economic growth and improve quality of life.

Secretary Jewell commented on the power of parks to transform communities. She was excited, specifically, that this will help urbanizing populations in cities like St. Louis reach not only the historic Gateway Arch but also the beautiful Mississippi River. She also commended St. Louis for recognizing this project as a really good investment. Vice President Biden echoed that sentiment, adding that the United States has a long history of leadership in this country understanding that the infrastructure is “the back upon which this great nation has been built.”

The speakers also celebrated the project as a true model of partnership. Secretary Jewell explained that this is the future – to be engaging businesses, philanthropies and citizens in addition to government at every level. The Vice President added that the federal government has never done every project alone, but that contributing to the vision and providing seed money helps to “attract the kinds of investments that are needed to complete these types of projects.”

Vice President Biden, who described his first time viewing the Gateway Arch from below as “breathtaking,” ended his remarks emphasizing the economic value of projects like this one, noting that it creates 530 construction and 4,000 permanent jobs.

“Our mission to improve the quality of life for St. Louis residents is one that we deliver on in very specific ways,” explained Trautman. “It was an honor to hear Vice President Biden and Secretary Jewell mention several of them – connecting communities and neighborhoods, preserving and connecting people to nature, and of course promoting regional economic vitality.” 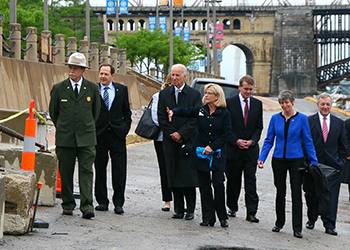 Emma Klues is the communications manager for the Great Rivers Greenway.

Editor’s Note: Hosting elected officials at your local parks and recreation is a great way to demonstrate the impact and value your work brings to the community. If you are hosting visits with elected officials, let us know about it or tweet us @NRPA_News.