How many people can say that they have been recognized nationally for the work that they have done? My assumption is not many. At my first NRPA Annual Conference in Baltimore (2008) I remember being blown away by the National Awards reception. I couldn’t help but think, wow, this is so amazing to recognize fellow park and recreational professionals on this level. The faces and reactions of those who received awards were those of extreme excitement and pride. I recall wondering, how does someone go about walking on that stage? At that point, I could only hope that someday I would be fortunate and successful enough to be honored in such a way. Did I ever expect to win a National Award? I guess not; but I would have never known or had the chance if someone did not take the time to nominate me. 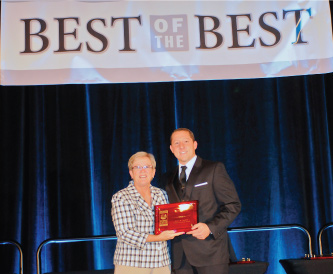 I was awarded the NRPA Robert W. Crawford Young Professional Award in October of 2013.  I can honestly tell you that it was a once in a life time experience that I will never forget.  This profession is my passion and is rewarding on a daily basis, but to be recognized by my peers through this award brought a whole new level of fulfilment to me.

After receiving the award, colleagues and participants from all over reached out to express their excitement for me. Shortly after I returned from Houston, the City of Rochester newspaper, the D & C, contacted me to write a full page story about the award and what it is that I do for my community. At the time I worked as the Assistant Recreation Director for the Town of Chili, NY, a suburb outside of the City of Rochester, and so all of the surrounding suburbs received this article. It was read by so many people in the area, now more than just colleagues and participants, who, again, reached out to me with kind words, support and happiness. My fifth grade teacher even wrote me a letter upon hearing the news and I had not seen or spoken to him since, well, fifth grade! This recognition was now so much greater than peer recognition as the general public was painted a clear picture of what it is I, a recreation professional, do for a community. As many of us know and struggle with, people outside of the profession rarely understand and appreciate what exactly we do outside of ‘summer camp’, ‘Easter Egg Hunts’, and ‘flag football leagues.’

Now, I am not saying that this award got me my new position, but it certainly did not hurt.

What I am saying is that it is extremely important to nominate people and/or programs for NRPA’s National Awards. If someone had not taken the time to think of me and then complete the nomination process, I would not have this story to share today.

I want to thank Shane Mize, Recreation Superintendent, Missouri City Parks and Recreation, TX for nominating me last year. I caught up with Shane to enlighten me about the nomination process and its importance to him. Here is what he had to say:

“It is a simple process that did not take much time at all. I filled out the nomination form answering the questions and then got additional letters of recommendation.

“A group of us YPN folks were talking and we knew of a couple people who were worthy to be nominated… It’s a great way to highlight what the YPN does and what the individual young professionals do.”

Building on what Shane said, nominating people and programs for awards is great way highlight everyone and all that we do in this great profession.

I personally am very thankful for the time Shane took to nominate me and to all of those who wrote supporting letters on my behalf. Whatever amount of time it took, it was absolutely worth it!

With that, I ask you to take the time to nominate an individual or agency this year! What is stopping you? Time? We are all short on time so that is not an excuse we can be willing to always fall back on. Is your nominee award worthy? To that I say, you will never know if you don’t try.

I want to leave you with a question and a challenge:

Thomas Venniro is the Director of Parks and Recreation in Hilton-Parma, NY. He is part of a great team that offers a variety of programming. Throughout his career, Thomas has been able to build up a library of knowledge in which he eagerly passes on to patrons and fellow professionals. Over the years Thomas has been recognized at the local, state and national levels. Additionally, he is currently serving as the Past-President of his local society, President-Elect of the NYSRPS, and as the Past-Chair of NRPA's YPN. Not only is recreation Thomas’ career, but his passion as well. His hobbies include cookies, playing sports, attending special events, bike riding and enjoying the company of his family, golden retriever, Marty, and beautiful girlfriend, Melissa.