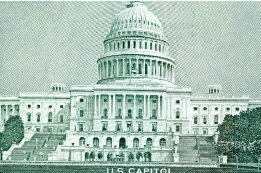 Congress returned to DC for a post-election “lame duck” session where the most pressing piece of unfinished business was to approve a final budget to keep the federal government open and running for the remainder of Fiscal Year 2015 (ending September 30, 2015). In what has become the norm (unfortunately), they went right up to their funding deadline (December 11) and even needed to approve a couple of multi-day extensions just to keep the lights on while they completed debate.

Ultimately, both the House and Senate approved the $1.1 trillion measure which will, indeed, keep nearly all of the federal agencies operating until the end of September. The lone exception is the Department of Homeland Security, which is only funded through February.

Here’s how programs important to parks and recreation made out in the final FY15 spending package. (Spoiler Alert: YOU helped ensure continued funding for essential programs). For additional information, including the full text of the measure (H.R. 83) as well as a section-by-section “Explanatory Statement” covering all agencies and programs funded in the measure, visit the House’s Committee on Rules.

Health and Wellness in the Congressional FY15 Budget

The Division of Nutrition Physical Activity and Obesity (DNPAO) received $47.6 million, up from $40.1 million in FY14. However most of the funding for DNPAO comes from Prevention Fund dollars.

The CDC Arthritis Program saw a small reduction in funding with $9.6 million down from $13 million in FY14.

Earlier this fall, NRPA learned that senators were proposing to virtually eliminate the CDC Arthritis Program which provided funding used by many park and recreation agencies to serve individuals suffering from arthritis in their communities. Along with our member agencies and partners, NRPA was able to successfully advocate for the restoration of this funding.

As the nation’s most common cause of disability, arthritis intervention programs are essential to managing healthcare costs and quality of life. According to the CDC, an estimated 52.5 million U.S. adults report having arthritis and that number is expected to grow to 67 million by 2030.

The CDC arthritis funding that had been proposed for elimination has supported NRPA’s partnership with the Arthritis Foundation, the National Association of Chronic Disease Directors and the CDC to implement the Arthritis Foundation Exercise Program and Walk with Ease interventions through sub-awards to local park and recreation agencies. Through the first year of this initiative, nearly 2,400 people were involved and we expect to reach an additional 1,000 people next year.

With your help, NRPA fought to restore funding for the CDC Arthritis Program in the FY15 budget. Thank you to our park and recreation advocates on the ground who signed letters and sent emails to their congressional leaders. This is a great example of how local support for federal programs can make a difference. The NRPA advocacy team will continue to seek out your stories and ask you to add your voices to help save or enhance other programs that are critical to park and rec agencies across the country.

Conservation in the Congressional FY15 Budget

The LWCF State Assistance Program received a total of $48 million for FY15 – level with FY14. This amount includes $3 million for the continuation of a pilot national competitive grant program created this year.

The National Oceanic and Atmospheric Administration (NOAA) received $4 million for the Environmental Literacy Grants (ELG) program and $7.2 million for Bay-Watershed Education and Training (B-WET) program. This total of $11.2 million represents a $400,000 increase over the previous year.

The popular TIGER (Transportation Investment Generating Economic Recovery) grant program received $500 million, compared to $600 million in FY14. The final figure was more in line with the Senate recommendation of $550 million than the House committee recommendation of $100 million. The Senate also successfully fought off a House proposal to prohibit the use of TIGER money for “non-essential” projects, including bicycle and pedestrian paths.

The Community Development Fund received just over $3 billion down from $3.1 billion in FY14. Of the total, the agreement provides $3 billion in formula funding and $66 million specifically for Indian tribal nations.

NRPA’s advocacy will continue to keep you updated with what’s happening on Capitol Hill into 2015, especially as legislation important to parks and recreation is set to expire in the new year including the MAP-21 Surface Transportation Reauthorization, the Child Nutrition Act and LWCF.