Ease on down the road, but you still better think FAST! 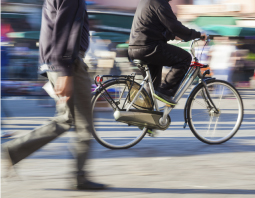 Between looming deadlines that demand action and simply wanting to be viewed as "doing something,” Capitol Hill often fills with a flurry of activity during the holiday season. While there has been activity on other legislative priorities, this message is exclusively about transportation.

AND, the news is very good.

What follows is a summary of bicycle and pedestrian provisions in the new law and is an amalgamation of data collected by NRPA and partners, including Safe Routes to Schools National Partnership, the Recreational Trails Coalition, and Transportation 4 America.

Outside of TAP, there is additional good news:

While we would have preferred the much stronger approach taken by the Senate, a status quo outcome for active transportation during these extremely difficult budgetary times must be considered a solid victory.

The bill ended up receiving overwhelming bipartisan support in both chambers. Final House passage was 359-65. The Senate vote was 83-16.

With that, THANK YOU again for your advocacy efforts on behalf of making our communities safer and more accessible for all and congratulations on this legislative victory! For the first time in about a decade, we can end one year and begin another knowing we have long-term, dependable funding for bicycle and pedestrian projects to look forward to.