An excerpt from the recent article on play deserts in the April issue of Parks & Recreation Magazine tied in perfectly with the reality of a park I visited a few weeks ago in Charlotte, North Carolina. In the article, Arthur Wendel of the CDC’s Healthy Community Design Initiative, National Center for Environmental Health, points to a 2007 Trust for Public Land study to explain how park access is critical for improving community health.

Although there’s a higher ratio of park land to residents in Los Angeles than New York City, 91 percent of NYC residents live within a quarter-mile of the closest park compared to 33 percent of those in L.A. “Even this overstates park access,” Wendel says. “You can live within 100 feet of a park, but if you don’t have a direct way to get to the park, you might still have to walk miles on the road network to reach a park entrance.” Even with a park right in the neighborhood, it’s easy to see how difficult access will dissuade people from using this kind of public good.

A few weeks ago, I traveled to Charlotte to visit Lincoln Heights Neighborhood Park, the site of NRPA’s 2014 Parks Build Community (PBC) project. You’ll be able to learn more about the plans for Lincoln Heights in the July issue of Parks & Recreation Magazine, but in the meantime, I’d like to share some information about the community this park will serve. According to the U.S. Census, nearly 10,000 children under the age of 14 live in the ZIP code where this park is located, and until 2011, Lincoln Heights was a true play desert. Mecklenburg County Park and Recreation Department recognized this years ago and began a decade-long process of securing the land for Lincoln Heights Neighborhood Park. In 2011, Mecklenburg County built “phase one” of the park. The initial build included installation of a playground, a community garden, a walking trail, a bike rack, several picnic tables and a water fountain. The community has been thrilled to have a dedicated space in their neighborhood for play and recreation, but with nine acres of largely underutilized space, there’s room for a lot more exciting possibilities.

NRPA and Mecklenburg County Park and Recreation selected this park for the 2014 PBC initiative because they felt improvements here had the potential for the most impact on the surrounding community. In the past few months, they’ve partnered with companies like Playworld Systems, Greenfields Outdoor Fitness, Cornilleau USA, The Coca-Cola Company and Poligon by Porter Corp. to develop a plan that maximizes use of this space. In addition to bringing in a number of exciting play elements like a Unity Climber and a NEOS 360 game structure from Playworld Systems, the design also includes additional access points to make the park easier for the community to use. Right now, the linear park is blocked off on its long southern edge, so residents have hacked a rough path through thick brush and vines in order to access it without walking several blocks around. Although some teenagers and adults are willing, and able, to traverse the dirt pathway in order to access the park, it’s understandable that parents with young children are hesitant to do so, and the rough trail is impossible for elderly visitors or people with mobility limitations to use. 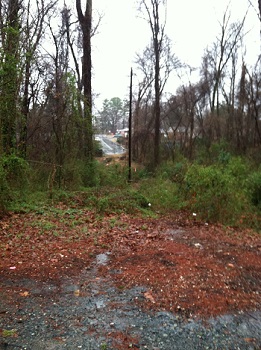 Access to the park’s southern edge along La Salle Street, approximately a quarter of a mile in length, is currently limited to a rough, unofficial path formed from the end of Irma Street into the center of the park

When I visited the park in mid-March, it was a cold, rainy Monday, but a number of community members still showed up that evening at a master planning meeting held at nearby West Charlotte Recreation Center. I spoke with two Lincoln Heights community matriarchs, Mary Jones and Thelma Byers-Bailey, Esq., both of whom were extremely pleased to hear about the plans for the park, particularly the forthcoming Irma Street connection in the middle of the park on the southern end that will allow better access. More than anything, they want this park to be used. It was clear that both of these women have a deep love for the children and families in their neighborhood, and I’m convinced that they will watch over it with eagle eyes to ensure it’s used well.

With increased access, more members of the community will be attracted to what’s going to be a very exciting park when all is said and done. If you build it, and make it welcoming and easy to get to, they will come.

NRPA started the Parks Build Community initiative in 2009 to help showcase the transformative power parks can have on their surrounding communities, and since then, the association and its partners have built or revitalized four community parks across the country. Lincoln Heights Neighborhood Park in Charlotte will be the fifth site transformed by the initiative.

Danielle Taylor is the Senior Editor of Parks & Recreation Magazine. Follow her at https://twitter.com/AdventureEdit.