2014 certainly was an interesting year. If you want the full recap on the craziness of what transpired, I’ll let Dave Barry do the honors, but for a summary of what 2014 delivered to parks and recreation, you’ve come to the right place.

With 2015 — and the celebration of our 50th Anniversary — fast approaching, let’s take a moment to look back at a few of the top stories and our collective successes that transpired this year in parks and recreation.

In 2014, headlines across the country were full of stories about parks and recreation. Some of the items that interested you most included an article on a U.S. Supreme Court ruling that threatened the future of rails-to-trails and another on the trend of “wild” playgrounds as covered by NPR.

Other notables in the news of parks and recreation included stories covering the role we play in the fight against childhood obesity — specifically NRPA’s commitment to the health of America’s children made side-by-side with the  First Lady through the implementation of standards for healthy eating and physical activity, especially during out-of-school times.

In 2014 there were stories of great generosity to parks, such as an apparent record-breaking pledge of $350 million for a park in Tulsa, Oklahoma. We also saw news turn to equity in parks, with a spotlight on the new mayor of New York City and his vow to fight inequality in parks across Manhattan and the boroughs.

While there were countless other stories about parks and recreation in the news this past year, nothing can top the collective success of the field as demonstrated through the membership of NRPA. 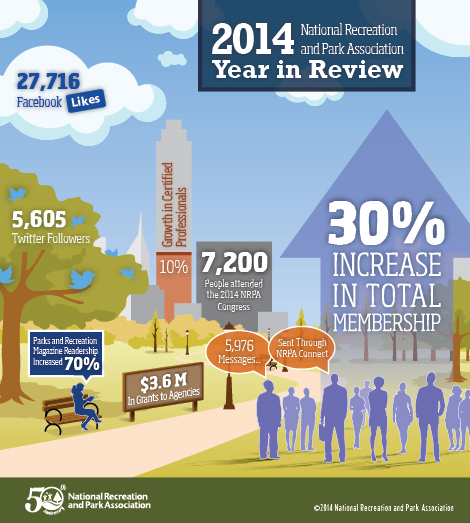 So, as we say goodbye to 2014 this week, we look forward to another incredible year for parks and recreation ahead. We know the future of our field is bright, especially with all of you working so hard to advance our field and tell the amazing story of our impact on conservation, health and wellness, and social equity in communities everywhere.

Cheers to 2015, to you and to the future of parks and recreation everywhere!

What will you remember most from 2014 as it relates to parks and recreation? Leave a comment below or tweet us @NRPA_News.

Lauren Hoffmann is NRPA's Director of Marketing and Communications.